The government shutdown threw the country into chaos this week.

Many news outlets reported the event as if having recently taken a folding chair to the face which is why we caught up with the unruffled chair resistant good looking, Schworn Honesty at Folk’s News.
We arrived to find his dressing room door closed ( no doubt due to the withdrawal of government funding ) but Schworn, after only five minutes of trying, utilized his own reserves to rectify that situation.
” My door is always open to Monkey Pickles “, said Schworn smiling broadly.
” As is your robe, Mr. Honesty ” , we replied while politely declining his hug.

You were on air when The Shutdown came into effect, how did you report the situation ?

” For a while I thought it was a wrestling event ” laughed the media professional ” right up until my producer told me, while we were at commercial, that my previous segment was a brilliant satire. I don’t remember planning that & it was a little embarrassing when wrestling legend, Hulk Colburn , turned up for the guest slot … but situations are very fluid at the sharp end of the news … which is why I wear a diaper. “
” It can be very confusing. When I first started I didn’t know what an autocue was. I was like ‘ I don’t want to present my show, stuck in traffic’ & for months I really did think I worked on a news show.”

Is it difficult to cover a news situation that is at stalemate ?

“Yes, usually I have key decisions to make on the spot  Should  I drink that coffee now ? Is it too hot still? Is it not coffee but a raccoon & is that why it is looking at me in that angry way ? Why would we have a raccoon in the studio ? It’s not the symbol of our network …. although, neither is coffee.  And there are distractions. Like that guy in the adjoining dressing room… dressing up as me… copying what I do. I don’t know why we let him in the building. … I guess he is my understudy.  A jerk though. Never comes out for  drinks … and it’s not like I don’t  drink a lot.”
” Still, as a professional, you have to block out distractions like hallucinations, criticism or facts and blindly charge on with what sounded good in your head.”

Does it take you long to prepare for a show ?

” I am blessed. With my good looks I don’t have to spend much time with the make-up department, I can go straight on set & just make stuff up off the top of my head. It really saves time if you don’t check facts. “

How do you react to criticism that your hair is silly ?

” Honestly, I resent it. My hair is no sillier than the rest of me. Comments like this are hurtful & untrue … & I think they infringe several copyrights. ”

Getting back to the issue of the government shutdown, who do you think is to blame ?

” Clearly, the administration. On no few than 4 occasions or more than 4 occasions …  4 occasions, in fact … did the opposition present plans only to have them dismissed out of hand. It is most disappointing indeed that the administration would not concede any ground regards the wearing of tights or  Spandex on Capitol Hill. But, might I add, the WWF must also share some responsibility for driving through legislation making it illegal for a man to fight a panda. … I really wanted to see that. “
Sadly that was all the time Schworn had for us, as the studio was out of Mint Berry Crush & he had to make an urgent 911 call. 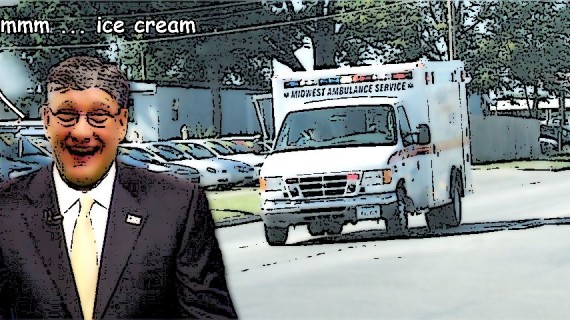 What To Do When Bored At A Party

What To Do With Your Used Wedding Dress

20 Funny Acronyms (And Their Meanings) That You Should Know