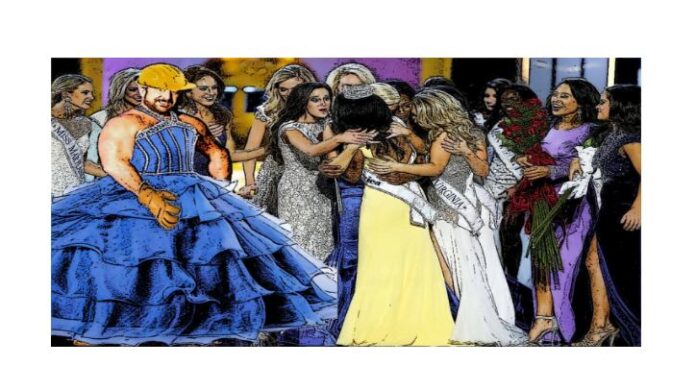 New ground was broken this week …

and then fixed by construction worker, Pat Legowski, as he competed in America’s most prestigious beauty pageant. Monkey Pickles put on its monkey suit and took up a VIP invite to the construction site adjacent to the venue to bring you this important story. Sorry CNNN, I guess you’re stuck with ‘Chuck Norris fights time traveling  dinosaurs on the Moon’, ” It may have been an administrative mix up,” commented the radiant construction worker, beaming at having made the televised rounds, ” but it was a wonderful experience and it was great that the organizers allowed me to take part. ” A pageant spokesperson reluctantly admitted, ” It does appear that one of our foreign exchange interns thought that Long Island was an off shore state, like Hawaii or Delaware. The individual did think, however, that Legowski was an unusual name from a contestant for a South Pacific coral atoll but the concerns weren’t flagged up and the mistake wasn’t detected until Pat turned up to compete.”
The spokesperson, continuing to speak economically,  nevertheless confirmed that the intern had not been dismissed but had been retrained.

“Dismissal was never an option.”

“The individual is now working with catering, making sure that the contestants get the 53 diet waters & one Megaburger with extra fries that are consumed each day. Our pageant is about seeing the beauty in everyone, warts and all. …. You have nice eyes.”
Later on, however, the spokesperson did concede that actual warts could be a disadvantage.
Mr. Legowski, however, was far more forthcoming and agreeable about his experience.
“I almost fainted when my official invitation arrived in the post. I was thrilled but with such short notice, I couldn’t arrange time off work to prepare. I had to practice my walk and twirls during lunch at the construction site. And let me tell you, it is not easy to turn on a girder 100 feet up in the air when you’re wearing heels and a dress that catches the wind. “

“Work and the guys were really supportive, though. I already had the gown as I had been competing locally for some years, but it was surprising how many colleagues came forward with dresses for me to wear. I didn’t even know that half of those guys were married. It was swell to know I had a great wardrobe for the big night.”

back in the bad old days, but it’s not how it used to be on the construction site. For instance, ya can’t bring ya baby ta work no more. We’re not the lecherous wolf whistling stereotypes of da 80s. Ya still get the whistling but there’s no discrimination now, y’know. Dames, guys, guys dressed as different guys they only dress as on Wednesdays, dogs – ya get a really good reaction from dogs, rabbis … Everyone’s the same, y’know. Everyone is beautiful. ”
” An’ they give ya the love back too. It really gives a guy’s confidence a shot in the arm when he’s catwalking along the skyline with a thermos & a lunchtime burger, when the fire department is called out ’cause someone thought you were a danger to yourself and they start cheering ya on. ”

The Beau Of Long Island …

…continued to enthuse about the pageant
” It was like a building site when I arrived. All the girls were lovely, just like my workmates. I had a hard time believing none of them had construction experience. I would have been delighted whomever won. How could I not feel like a winner ? They gave me the best pedicure I had in years. It was so nice not to have to make do with grouting and an industrial sander.”
” The organizers were great too, They even let me help put up the stage. Y’know, they could of sent me home but said the pageant was all about unity and bringing the world together. So they let me stay, as long as I was okay with a non-competitive role. I was like baseball at the Olympics. A popular inclusion that just needed testing out before awarding medals. I guess it was good press ”
When asked about whether the handful of negative comments reported by some news outlets had tarnished the event, Pat said,

“Nina was elegant and dignified,

like a gorilla in a forest clearing. I don’t know why some people dumped on her. They were petty ignorant comments. The winners do such good work raising the profile of charities, drying puppy dog tears and supporting ballet like I do. I too know Nina’s pain. It’s not often but you still get the occasional meanie who’ll yell, ‘ Pal! Hey pal! … There’s a crack on your foundation stone ! … It’s your butt crack ‘ … It’s so uncalled for but, like Nina said, ya have to rise above it. So , that’s why I like to work on the top floor at the site. ”
Pat placed a nominal 32nd in the event, pronouncing that he was not at all disappointed.
” The rules prevent me from competing again next year but I think my inclusion this year has broken down barriers & built bridges. I think next year’s pageant could be the most exciting yet. I have the most beautiful chihuahua at home. I think she has a really good chance if I can just find the right outfits.”

What’s The Best Smell In The World?

When You Know You’ve Had Too Many Redbulls, Monster Energy & NO-DOZ

Let’s Address The Elephant In The Room