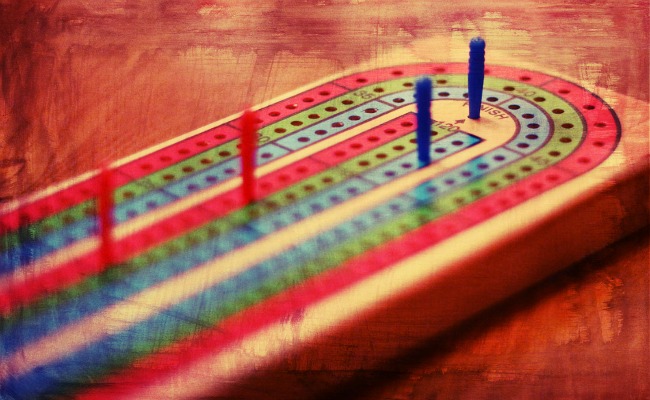 Cribbage is a fast game characterized by numbers. It involves gathering points by combining different cards in order to make series of runs. The concept is simple, but you need to have a strategy as well as tactics. Cribbage essentially relies on instinct and experience rather than absolute mathematical calculations. At times you try to make a scoring combination, at times you hinder your opponent from making a score; each game is unique in its own way.

Here are the basic requirements and a step by step procedure on how to play cribbage.

What You Need to Have in Order to Play Cribbage

What Is The Object Of A Cribbage Game?

For you to beat your opponent, you need to go around two tracks on the cribbage board with pegs, more or less the same way a horse does in an oval track during a race. When you successfully complete a cribbage circuit before your opponent, then you emerge a winner. Every point that you score takes you to the next available space. You need to score a total of 121 points to complete a single cribbage game.

By mastering these basic concepts, you can be ready to play cribbage in no time!

Setting Up The Game and Formation Of Hands

With a cribbage board, a deck of 52 cards, and two pegs for each player, you are ready to go! The pegs that are usually found underneath the cribbage board are basically used for scoring purposes. Use the two pegs to indicate the scores of both the previous and the current score, so as to achieve accurate match scores.

Depending on how many players you are playing the cribbage game with, you need to determine a dealer. Here is a simple guideline on how cribbage can be played depending on the number of players:

Now you have the cards, how then do you establish who get to deal first? It is simple, the player that cuts the lowest cards get the chance to deal first.

It’s now time to pick up your cards. Have them arranged starting with the Ace being the smallest, to the King being largest. Arrange your cards in the most convenient manner. The best way is to arrange them in such a way that you are in a position to count points easily when the need arises.

How do you get to accumulate points? You get to earn points when you have:

This is where you need to bring in a bit of arithmetic. Quickly calculate a combination that gives most possible points. This step is essential because you are required to discard two cards if players deal six cards, and one if five cribbage cards are dealt.

Players discard two cards, and the discarded cards are known as the “Crib.” The cards are counted by the dealer at the end of the game for extra points, so it’s important to keep that in mind when discarding.

Once you have discarded the crib, the game can begin. The player seated to the left of the dealer cuts the remaining cards. Thereafter, the dealer removes the top card. The card that is pulled, often known as the ‘cut card’ is placed at the top. The step is subsequently followed by a player seated to the left of the dealer laying down the first card. The card is laid face down with the face value of that card being announced by the player. All the cards have their face value, with the king, queen, and jack having a face value of ten. Start by laying down cards with highest face value.

You will be able to get points by:

Combos Of 15, Runs, Pairs, and Three-Of-A-Kinds

Handing Over The Crib

The dealer hands over the crib for it to be counted. The dealing continues beginning from where it had stopped before the counting of the crib. The process continues until one player gets a total of 121 points. This brings the game to an end.

Tips and Strategy for Playing Cribbage

What’s The Worst Way To Break Up With Someone?

Not Really What You Wanted, Eh?