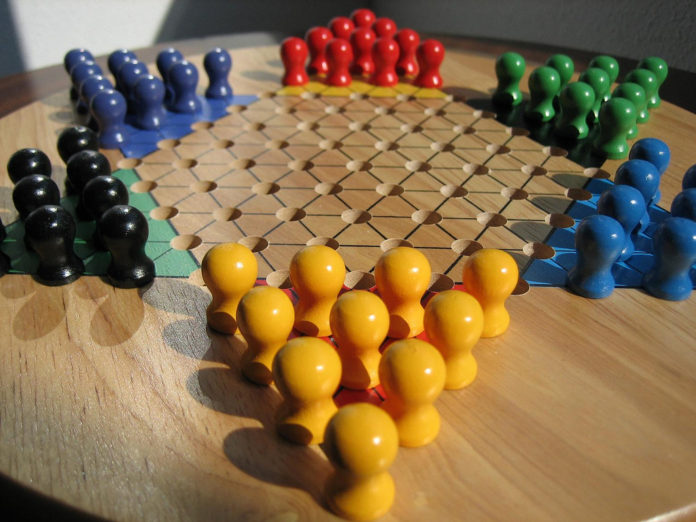 If you’ve ever felt like you’ve lost your marbles, chances are you may actually be able to find them in a game of Chinese checkers. Or, depending on how the game goes, you might actually end up losing even more marbles. But what a way to lose them, right?

You may think that you know everything there is to know about this fantastical game, but there is so much more to Chinese checkers than meets the eye.

How to Play Chinese Checkers – History and Background of the Game

Fun fact: Chinese checkers is not checkers. If you’ve ever played both games, you’ve probably noticed that even though there are similarities between the two, the game boards and pieces are completely different. There is a chance that you may not have noticed this, but that’s a problem to be sorted out between you and your optometrist and has nothing to do with understanding this game.

Another fun fact: Chinese checkers is not Chinese. It did not originate in China or any other area on the Asian continent, for that matter. It was actually invented in Germany of all places. In 1892, it was created and given the name “Stern-Halma.” There was already an American game that went by the name of Halma that employed a square shaped board, and “Stern” is German for “star,” which not so coincidentally is the shape of the board used in this game.

Of course, as is the case in so many situations, marketing ended up playing a role in how this game is known. The name “Chinese Checkers” came to be associated with this game in the United States, another country that is not China. Bill and Jack Pressman came up with this name as part of their marketing plan for the game in 1928. In fact, had they had their way, this game would now be known as “Hop Ching Checkers.” And after all that, the Chinese were among the last to actually play their namesake game when the Japanese introduced it to them.

It is actually quite easy to set up this game. All you really need is the game board and the marbles that come with it. The board comes with six sets of 10 marbles. Usually, they are separated by color, but if you so choose, you can replace the sets of marbles with your own marbles. Perhaps you would like them to be separated by what type of insect can be seen on the inside, or which type of cute fuzzy animal is depicted on the tiny little photo trapped inside the marble. It’s up to you what types of zany marbles are used in your run-throughs of this game.

After each player has chosen a color (or other distinctive characteristic of a set of marbles that may apply here), you will all put your set of marbles into a corner of the board. The goal of each person in the game will be to get all of his or her marbles into the opposite corner, otherwise known as ‘home,’ before anyone else does.

What you should remember, however, is that you need to have an appropriate number of players in order for the game to work. Since the objective of the game is to get all of your marbles to the other side of the board, it really wouldn’t be that much fun if you only had one person. You will need two, three, four, or six people in order to play this game the way it was meant to be played. Plus, if you only have one person, you’ll miss out on the best part – fighting with other players after someone else has made a wrong move. You can always fight with yourself, but where’s the fun in that?

Oftentimes, the strategy will depend on how many players are a part of the game. If you have six players, for example, all six corners of the star will be filled at the beginning, and you will be able to move your marbles into ‘home’ only after it has been vacated by your opponent.

Basically, you get all your marbles across the board by doing the following with each turn – either moving them into an adjacent space or hopping over one of your opponents’ marbles. But it’s not as simple as it seems. A big part of winning is being able to hinder your opponents as well. You want to make it hard for them to get into their home corners. You can do this by moving your own marbles in such a way that they create bridges that will force your opponents to take longer paths. Or if you want to play dirty, of course you can try to impede your opponents’ concentration by other means, such as the “look, a bird!” tactic or spiking their water with tequila so their brain capacities will hopefully be diminished.

Of course, you can also employ the time-honored strategy of shoving all your opponents’ marbles off the board and onto the floor, but you should be warned that you are likely to lose a lot of friends if you do this on a regular basis.

How to Play Chinese Checkers – Variations of the Game

There are few different variations of this game for those who want to try something new once in awhile. Here are a couple of the most popular ones:

In this version of the game, players can hop not only over pieces in adjacent spaces but any piece anywhere on the board. You basically just hop over the piece of your choosing and end up at the equidistant position on the other side.

In this version of the game, players are not assigned a specific color of marble. Players just take turns hopping over other game pieces and “capturing” the poor hopped-over pieces in their bins. If you are playing the capture version of Chinese checkers, you’re only allowed to move by jumping over other pieces, not by simply moving pieces to adjacent spaces. When it is no longer possible to jump over other pieces, whoever has the most captured pieces is the winner.

Here is a quick visual tutorial for How To Play Chinese Checkers: