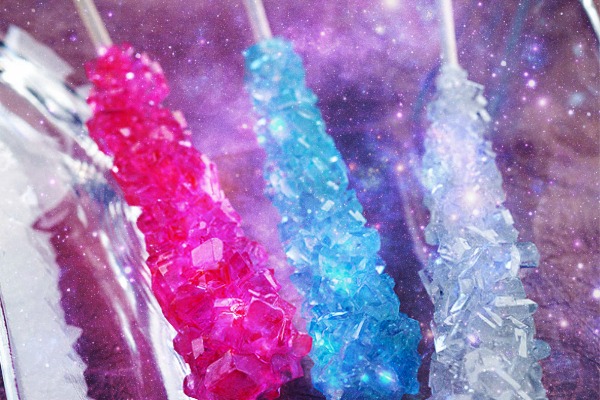 If you have a sweet tooth, you probably wouldn’t turn down rock candy. But there are a couple of problems with it. First of all, it’s so simple. It basically is just sugar on a stick. Most of us with that sweet tooth want a variety of sweet flavors to send us careening around the house like rabid monkeys. Second of all, there isn’t nearly enough rock candy to satisfy your sugar fix on most of those sticks. It’s just a couple of bites and then you’re done. You can remedy both of these issues by making your very own rock candy and making your own rules.

For this DIY rock candy, you’ll need the following:

Once you have all of your supplies, you’re ready to go!

How to Make Rock Candy – Mix the Solution

The first thing you need to do is make a solution. Normally, rock candy is made by mixing sugar and boiling water. But you’re probably looking for something more interesting than normal rock candy, so you can add in the candy of your choice to the mixture. It can be whatever your heart desires. Can’t get enough Snickers? Toss some of those in there. Are you more of a caramel hard candy fan? Do that instead. You could even experiment and throw in different types of candy if you want. Ever wondered what Jolly Ranchers would taste like mixed with peppermint patties? Now you don’t have to wonder anymore, just toss them both in there and see the results!

How to Make Rock Candy – Pouring it Into Containers

Once you’ve dissolved your candy in the boiling water, you can remove the mixture from the heat source, whether it be your stove or the burning lump of coal you got for Christmas (who knew being bad would actually pay off, right?). Now, it’s time to pour your solution into your jars. If you don’t have jars, you can use those beer bottles that are lying around from your roommate’s drinking binge this weekend. Hey, maybe you can share your candy with him and it’ll be so awesomely delicious that he’ll want that instead of the alcohol from now on.

How to Make Rock Candy – Clean Rods or Dirty Sticks

After you’ve poured out the hot solution into your containers, you can put your wooden rods in there. Your solution will need something on which it can crystallize. If you don’t have the nice wooden rods that you normally see in stores that come with rock candy, you can just use some sticks that you find in your yard. That might actually be even better, because they will be bigger and give you more surface area. And if there happen to be a few dead bugs on there, hey, that’s some extra protein for you too! Candy AND nutritional value, you really can’t get much better than that!

After a long, agonizing wait, your candy has finally crystallized. Depending on what type of candy your creative mind decided to use, it could have taken days or even weeks for the crystallization to fully complete. Now, it’s time to see your results. You’ll want to have some pebbles or rocks around for reference, because you want your candy to look somewhat like them. If your candy doesn’t look enough like these rocks or pebbles, you can actually add the rocks and pebbles onto your candy to better simulate the desired appearance. If nothing else, they will make the flavor interesting, and now you have minerals as well for even MORE nutritional value!

How to Make Rock Candy – Eat and (Hopefully) Enjoy!

This whole process was pretty fun, but now you get to the best part of all. You get to actually eat and enjoy your candy! So try it out, and let’s see what you think. Because you actually got to choose the candy you used, there is a chance that it will turn out even better than the rock candy that you have tried in the past. However, you should also brace yourself for the chance that it ends up being disgusting, with candy flavors mixed in that were never meant to go together and a bunch of dead insects and rocks. In that case, just remember, if at first you don’t succeed, try, try again!

So I was outside of a bar smoking a cigarette…