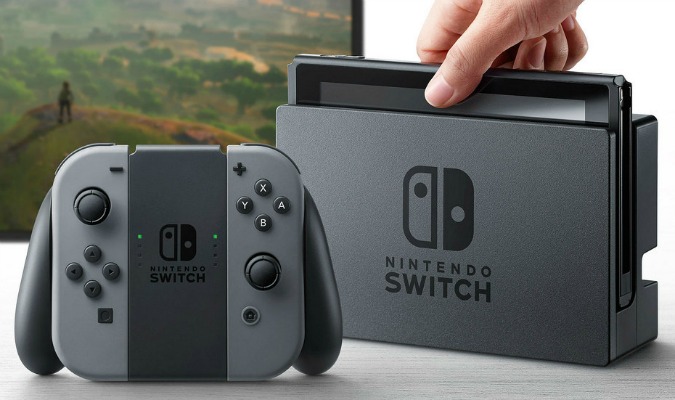 The newest Nintendo console, the Nintendo Switch, is out TODAY.

With the wishy-washy acceptance of the Wii U, Nintendo has a lot to make up for with their latest console. The Nintendo Switch promises the ultimate gaming experience, with the immersive experience of playing on your TV at home melded seamlessly with the ability to take the same game with you on-the-go (who are we kidding: you’re just gonna take it into bed with you).

If you’re new to gaming and consoles, the Nintendo Switch can seem like a daunting piece of equipment, but if you’re familiar with Nintendo’s other consoles, the Switch seems like the next evolutionary step for the long-standing gaming company.

The Nintendo Switch comes with the console, which is reminiscent of a tablet: lightweight, measuring about 8 inches wide by 4 inches tall, with a 6.2-inch touch screen. The console is either slid into its accompanying dock for charging and to play on your TV, or handheld with the two included Joy-Con controllers. The Joy-Con controllers are extremely multi-faceted, with the ability to be slid off of the Nintendo Switch for use on the Joy-Con Controller Grip (a controller-port reminiscent of a traditional Nintendo 64 controller), used together or separately as their own free-standing controllers (like the Nintendo Wii), and have motion controls and buttons to cater to your gameplay style. You might also consider getting a nintendo switch case to keep it protected at all times.

The Nintendo Switch is building gaps around the issues they have had in the past with their equipment, but how does it play?

Nintendo is like your outgoing friend at a party, wanting to include everyone and play something that all ages can be a part of. The Nintendo Switch is indicative of that “community first” mindset while being a great “party of one” console as well. Multiplayer modes abound- but unless you’re catering to one other person, you’re going to have to splurge for more controllers or rely on your friends and family to have their own Nintendo Switch console. That being said, there will be an element to Nintendo Switch to be able to play online with other Switch owners. Which will be great for games like Fortnite, which is now coming pre-downloaded onto new models of the Switch. Will stars like Ninja be making the switch? The current Ninja fortnite Settings have only been published for PC, he would have to learn this new control scheme before he started streaming gameplay from this console.

The games available for it are scant at this point, and with so many people eager to be the first to review everything, it’s hard to tell if the games are actually good or bad yet. Arguably the most highly anticipated game is The Legend of Zelda: Breath of the Wild, and the reviews ranging from sheer disappointment to “Best Game EVAR” are to be taken with a boulder of salt, as the actual play time of some of the reviewers is paltry at best. The game 1-2 Switch has been lauded as a great party game (a la Wii Sports or WarioWare), but most reviewers found it expensive as a stand-alone game and feel that it should have been included with the Nintendo Switch console.

What’s Next For Nintendo Switch?

Whether or not you’re a Nintendo fan, one thing seems clear: the Nintendo Switch is revolutionary and versatile. That being said, it is apparent that the console could have used some polish before it was released to the masses. The light at the end of the tunnel is that the promise of more fun content- for example, the capability to play nostalgia-inducing Nintendo games of the past with Virtual Console- is what will keep the Nintendo Switch in the forefront of potential buyer’s minds.

Speaking of gaming on the switch, my friend recently got a new broadband deal through Usave. He is so happy that he saved money and the service is better! He is so happy!