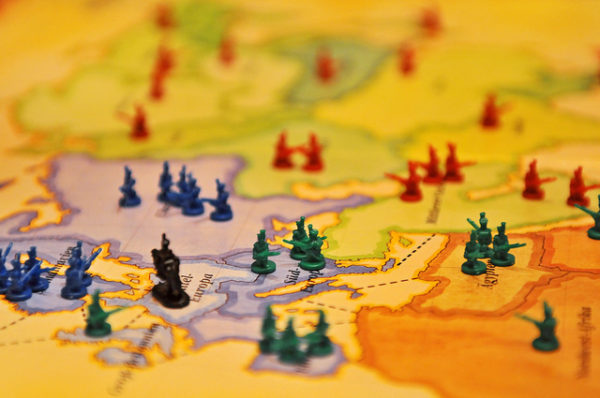 Risk is a classic strategy game that has captured the imagination. It introduces war and global ambition to a new generation of players. Originally it was a board game that invites many players to take turns together. The goal is to eliminate other players and gain strategic positions all over the world. A keen eye and clever imagination are required to win the game outright. Learn more about the game and its rules before starting. That should help everyone enjoy the game and stay competitive. Tactics could depend on a player understanding how to actively compete. To start, the Risk board must be set up and pieces arranged. Players should choose a color and identify where they want to start. Up to six players may sit down, but that could change some aspects of the game. Between two players, each person will be awarded 40 infantry units. With a third player, each person will be given just 35 infantry units. That will dwindle with the addition of a fourth, fifth or sixth player to the table. It helps to have a judge that could make a decision on the game itself. They may make decisions and intervene in a dispute when needed.

Set Up The Board

Disperse infantry units across the board for global control. The goal is to take over the world and eliminate rival players when possible. Each players turn will be divided in to roughly three phases. Every player will get an opportunity to compete and make their move. Stay patient and use each turn wisely to make progress towards a goal. The first step will be to open a turn and add new units to the board. The total area controlled by a player will increase the units they may add each turn. Deploy infantry units where needed to gain a strategic advantage. The next step will be to go on the offensive against a player. Choose an opposing region to attack with available units. Roll the dice to decide which units win and which units are destroyed. Repeated rolls could win a region for the attacking player. Players may attack as long as they have fresh infantry units ready to go. The third step will be to fortify existing units in place. That could bolster defenses and keep players ready to attack on the following turn. Use these steps wisely to avoid losing infantry units as needed.

The number of infantry attacking and defending may determine the dice rolled. With more infantry units, attackers and defenders may roll more dice. That will introduce more opportunities to secure a win on that location. Players will have to have higher points on their dice to win outright. A tie during a roll will tilt the advantage towards the defending player. Not surprisingly, it is difficult to attack and win a position. Make sure to have plenty of infantry units accumulated from the start. That may give the offensive player an advantage they need to win. Players have to leave one unit in a location to retain that spot. Dominance may rely on multiple different units, especially with a few opponents. Have a judge decide whether an attack is legal or what the dice roll has meant. These decisions could be the difference maker for a given player. With each turn, players can add an infantry unit for each territory that they control. That will add incentive for the decisions that players make each turn. Take over new territory to add a cumulative number of units on the board.

How To Control The Board

In all, there are 42 distinct territories available on the board. These territories will resemble countries and regions in the real world. That may be familiar for people who understand world politics as a whole. Some players may have preferences for where or how they start on the board. Choose a color and location to begin a specific strategy. Note that range is limited for attacks and movements with these pieces. That makes set up one of the most important steps for players. Feel free to add multiple units to a single territory on the board. That will make that territory and its armies more powerful against the opposition. But be wary about leaving only one infantry unit to guard a lone territory. That could expose the player and leave their lines outstretched against rival players. Roll a die to determine which of these players will go first. Aggressive players may want to attack from the opening round. Other players may take a defensive stance and accumulate additional infantry units. With multiple people playing, strategy may become more difficult to consider. Alliances may be formed and used to exploit weaknesses. One aggressive player could pawn off rivals against each other.

With enough units, players may trade in infantry for a cavalry or cannon unit. The cavalry unit is equal to five infantry pieces on the board. The cannon unit is equal to ten infantry pieces on the board. Keep track of these units and use them whenever possible to win a game. Attackers will get to roll the red dice on the board. The defenders will use the white dice to determine the outcome. Compare the red and white dice rolls to decide who wins during a round. Attacking is just one aspect of each turn, but that step could be vital. It could give the offensive player access to a region and expand their control. It may take some time to eliminate players and gain strategic position. Think about the long term approach that players may retain on the board. A great player will have patience and dedication to the end goal. Keep strategic locations important to the conduct on the board. Feel free to skip a turn without attacking on the board. Save infantry units and swap for a stronger piece. Get to know other players personally and keep things friendly in game.

How To Play Risk Video