Home Gaming How To Play Pickleball 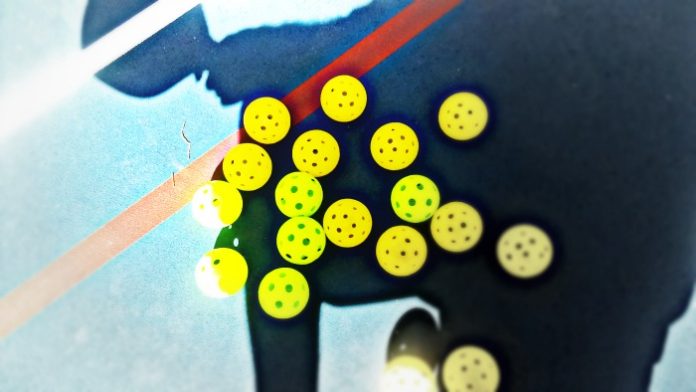 How To Play Pickleball – History Of The Game

Before we get into the nitty gritty of Pickleball, let’s get some background on the game. It all started on a boring afternoon during the summer of 1965 in Washington. A politician and his family wanted to play badminton, but couldn’t find the shuttlecock. Instead of shrugging their shoulders and calling it quits, they said, “We’re gonna play a game on this badminton court if it’s the last thing we do!” Although that is not a direct quote, we can safely assume someone said this, because the resulting game came from the blood, sweat, and tears of their plight: they found a wiffle ball and made some paddles from plywood to create the first-ever game of Pickleball!

How To Play Pickleball – Getting Ready

Now that you have some background of Pickleball, let’s talk about what you’ll need to play this game. Pickleball starts with a perforated wiffle ball, a badminton-esque court, a tennis-esque net, and table tennis-esque paddles. Are you with us so far? Now, if you are going straight-up OFFICIAL PICKLEBALL, you’ll need some very precise measurements for everything you use to play this game; after all, there is an International Federation of Pickleball, and those guys don’t mess around. We’ll keep it a little simpler in the interest of time, but if you decide to be a pro Pickleball player (Pickleballer?!), please dedicate your game-winning point to this article even if you didn’t learn everything you needed to. Thanks.

Pickleball can be played either in singles or doubles, like a tennis match. The court has the same dimensions as a badminton court, with some modifications to the lines. The net is pretty much a tennis net, but lowered to accommodate the way the perforated ball moves after it is hit.

How To Play Pickleball – Official Rules

If you’ve played a volley game, you’re already ahead of the curve! Pickleball can be simmered down to volleys and serves. When a player is serving, it’s called an “underhand stroke,” or if you prefer, “granny style” as we used to say when playing basketball. The serve must be hit diagonally to the other side of the net. After a serve, the opponent must allow the ball to bounce before it is hit, then the original serving team must ALSO let the ball bounce before volleying back. After that, it’s no holds barred Pickleballing back and forth until someone dies or, most likely, a fault is made. A fault happens when someone fails to return the ball properly or they go out of bounds.

In Pickleball, only the serving side of the net can earn a point for that set. Points are accrued when an opponent faults. The official point rules for Pickleball go a little something like this: whichever team ends up with 11 points- while being up by 2 points above their opponents- wins the set.

How To Play Pickleball – Equipment and Gear

One of the most exciting things about starting a new activity or sport is obtaining sweet new gear, amiright? Pickleball is no exception: as fun as Pickleball is, it’s also a competitive sport, and that means that people spend a lot of time and money to not only have the best serve, but the best paddle! The paddles used can be either wooden or made with aerospace composite materials with a fiberglass hitting surface. It’s the clash of old-school and contemporary, history and technology, GOOD AND EVIL… it’s serious business. As for clothing, think about what you’ll be doing on the court, besides perfecting your menacing Pickleball stare: moving around, getting sweaty, etc. Most Pickleball players want to be comfortable and efficient, so stick to sweat-wicking materials and sensible shoes that are good for court surfaces.

Here is a short video of some people just playing Pickleball for fun! The best part, other than demolishing your opponent, is the cool sound the ball makes when it hits the Pickleball paddle:

Thanks for joining us for this Pickleball edition of How To Play!