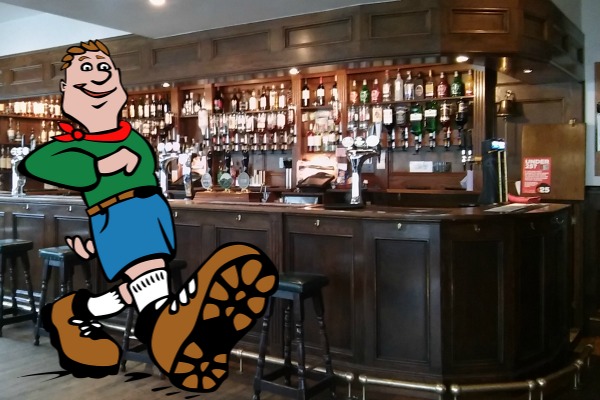 A Man Walks Into A Bar Jokes

A Drunk Walks Into a Bar…

Three guys are drinking in a bar when a drunk comes in, staggers up to them, and points at the guy in the middle, shouting, “Your mom’s the best sex in town!”

Everyone expects a fight, but the guy ignores him, so the drunk wanders off and bellies up to the bar at the far end.

Ten minutes later, the drunk comes back, points at the same guy, and says, “I just did your mom, and it was sw-e-et!”

Again the guy refuses to take the bait, and the drunk goes back to the far end of the bar.

Ten minutes later, he comes back and announces, “Your mom liked it!”

A Man Walks Into a Bar…

The bartender says, “Congratulations, you are our thousandth customer! Enjoy this complimentary beer.”

Bartender: “Of course, and it’s only five dollars!”

Man: “I thought you said it was complimentary?”

Beer: “You have beautiful eyes.”

A Gorilla Walks Into a Bar…

A gorilla goes into a bar and orders a martini. This totally amazes the bartender, but he thinks, “What the heck, I guess I might as well make the drink.” So he mixes the martini. He then walks back over to the give it to the gorilla, and the animal is holding out a twenty-dollar bill. Well, now the bartender is just at a loss for words. He can’t believe that a gorilla walked into his bar, ordered a martini, and then actually had a twenty-dollar bill to pay for it.

So, in amazement, he takes the twenty and walks to the cash register to make the change. While he’s standing in front of the cash register he stops for a second and thinks to himself, “Let me try something here and see if the gorilla notices anything.”

So he walks back over to the gorilla and hands him a dollar change. The gorilla doesn’t say anything, he just sits there sipping the martini. After a few minutes the bartender just can’t take it anymore.

“You know,” he says to the gorilla, “we don’t get too many gorillas in here.”

And the gorilla says, “At nineteen dollars a drink I’m not surprised.”

A Duck Walks Into a Bar…

Says to the bar tender, “I’d like to buy some peanuts.” Bartender says, “Sorry, don’t sell peanuts.” The duck leaves.

Next day, duck walks into the bar, “I want to buy some peanuts.” Bartender replies, “I already told you I don’t sell peanuts!” The duck leaves.

Next day, the duck walks into the bar, “I want to buy some peanuts!” Bartender yells back, “I told you, I don’t sell peanuts! If you ask one more time, I’ll nail you to the wall!” So the duck leaves.

A Man Walks into a Bar…

He tells the waitress, “I’ll have a Bloody Mary and a menu.”

When she returns with his drink, he asks “Still servin’ breakfast?”

When she says yes, he replies, “Then I’ll have two eggs- runny on top and burnt on the bottom, five strips of bacon ON END- well done on one end and still raw on the other, two pieces of burnt toast and a cold cup of coffee.”

Indignantly the waitress says, “We don’t serve that kinda stuff in here!”

The man says, “Funny… that’s what I had in here yesterday…”

A Man Walks Into a Bar…

Goes up to the bartender, and asks for a beer. The bartender stops him, and says “Well, before you order, let me tell you about our special.”

He directs the man’s attention down to the end of the bar, where there are two huge chunks of meat hanging on meat hooks.

“If you can run down to the end of the bar, jump up, and take a bite out of one of those pieces of meat, you get to drink free here for the rest of your life. But I’ll warn you, if you try it and fail, you have to buy all of the drinks for the rest of the bar all night.”

The man replies “Well, let me think about it. Mind if I take a look?” The bartender lets him, so he saunters down to the end of the bar, and takes a nice, long look at the hanging meat, before turning around and coming back.

“Alright, but just curious… why aren’t you taking the challenge?”

“Buddy, the steaks are just too high.”

The Continuing Adventures Of Tartan The Ape-man, Part 5: Cry Tearrier

7 Signs You’re Spending Too Much Money On Amazon