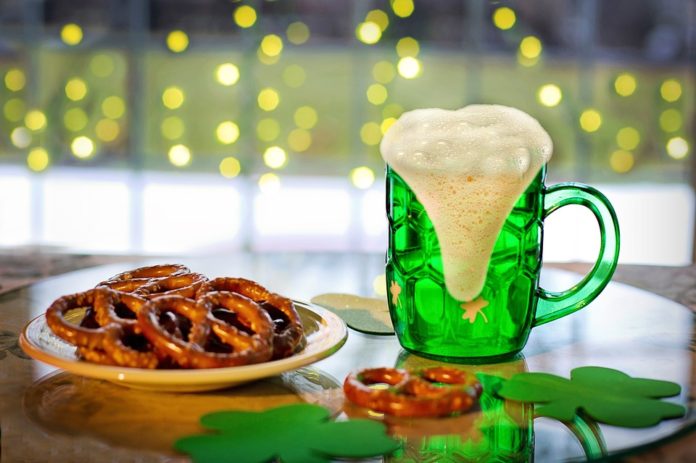 Paddy McCoy, an elderly Irish farmer, recently received a letter from the Department for Work & Pensions stating that they suspected he was not paying his employees the statutory minimum wage and they would send an inspector to interview them.

On the appointed day, the inspector turned up. “Tell me about your staff,” he asked Paddy.

Then there’s the housekeeper. She gets £190 a week, along with free board and lodging.

There’s also the half-wit. He works a 16 hour day, does 90% of the work, earns about £25 a week along with a bottle of whisky and, as a special treat, occasionally gets to sleep with my wife.”

“That’s disgraceful” said the inspector, “I need to interview the half-wit.”

One night, Mrs. McMillen answers the door to see her husband’s best friend, Paddy, standing on the doorstep.

“Hello Paddy, but where is my husband? He went with you to the beer factory.”

Paddy shook his head. “Ah, Mrs. McMillen, there was a terrible accident at the beer factory, your husband fell into a vat of Guinness stout and drowned.”

Mrs. McMillen starts crying. “Oh, don’t tell me that, did he at least go quickly?”

Paddy shakes his head. “Not really – he got out 3 times to pee!”

An Irish woman of advanced age visited her physician to ask his help in reviving her husband’s libido.

“What about trying Viagra?” asks the doctor.

“Not a problem”, replied the doctor. “Give him an ‘Irish Viagra’. It’s when you drop the Viagra tablet into his coffee. He won’t even taste it. Give it a try and call me in a week to let me know how things went.”

It wasn’t a week later that she called the doctor, who directly inquired as to progress.

“Really? What happened?” asked the doctor.

“Well, I did as you advised and slipped it into his coffee and the effect was almost immediate. He jumped straight up, with a twinkle in his eye, and with his pants a-bulging fiercely! With one swoop of his arm, he sent the cups and napkins flying, ripped me clothes to tatters and took me then and there, took me passionately on the tabletop! It was a nightmare, I tell you, an absolute nightmare!”

“Why so terrible?” asked the doctor, “Do you mean the sex your husband provided wasn’t good?”

“T’was the best sex I’ve had in 25 years! But as sure as I’m sittin’ here, I’ll never be able to show me face in Starbucks again!”

An Irishman was flustered not being able to find a parking space in a large mall’s parking lot.

“Lord,” he prayed, “I can’t stand this. If you open a space up for me, I swear I’ll give up drinking me whiskey, and I promise to go to church every Sunday.”

Suddenly, the clouds parted and the sun shone on an empty parking spot. Without hesitation, the man said, “Never mind, I found one.”

A Texan walks into an Irish pub and clears his voice to the crowd of drinkers. He says, “I hear you Irish are a bunch of hard drinkers. I’ll give $500 American dollars to anybody in here who can drink 10 pints of Guinness back-to-back.”

The room is quiet and no one takes up the Texan’s offer. One man even leaves. Ten minutes later the same gentleman who left shows back up and taps the Texan on the shoulder. “Is your bet still good?”, asks the Irishman. The Texan says yes and asks the bartender to line up 10 pints of Guinness.

Immediately the Irishman tears into all 10 of the pint glasses drinking them all back-to-back. The other pub patrons cheer as the Texan sits in amazement. The Texan gives the Irishman the $500 and says, “If ya don’t mind me askin’, where did you go for that 10 minutes you were gone?” The Irishman replies, “Oh… I had to go to the pub down the street to see if I could do it first.”

Paddy and Mick are walking down the road and Paddy’s got a bag of doughnuts in his hand.
Paddy says to Mick, “If you can guess how many doughnuts are in my bag, you can have them both.”

A car full of Irish nuns is sitting at a traffic light in downtown Dublin, when a bunch of rowdy drunks pull up alongside of them.

“Hey, show us yer tits, ya bloody penguins!” shouts one of the drunks. Quite shocked, Mother Superior turns to Sister Mary Immaculata and says, “I don’t think they know who we are; show them your cross.”

Sister Mary Immaculata rolls down her window and shouts, “Piss off, ya fookin’ little wankers, before I come over there and rip yer balls off!”

Sister Mary Immaculata then rolls up her window, looks back at Mother Superior, quite innocently, and asks, “Did that sound cross enough?

Father Murphy walks into a pub in Donegal, and says to the first man he meets, “Do you want to go to heaven?”

The priest said, “Then stand over there against the wall.” Then the priest asked the second man, “Do you want to go to heaven?”

“Certainly, Father,” was the man’s reply.

“Then stand over there against the wall,” said the priest. Then Father Murphy walked up to O’Toole and said, “Do you want to go to heaven?”

The priest said, “I don’t believe this. You mean to tell me that when you die you don’t want to go to heaven?”

O’Toole said, “Oh, when I die, yes. I thought you were getting a group together to go on a trip right now.”

Why are there no Irish lawyers?

They can’t pass the bar.