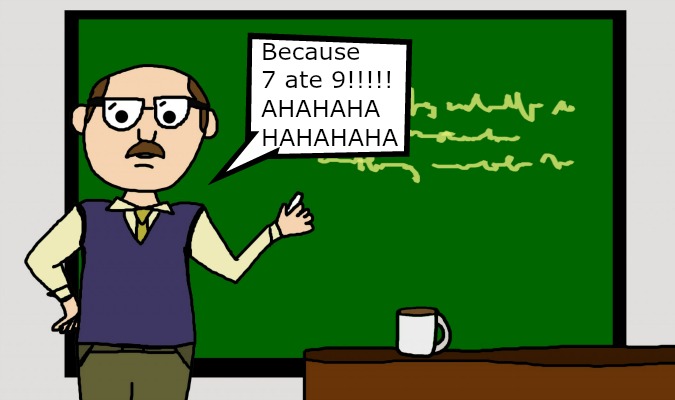 Whether you call it “math” or “maths” or simply “the worst subject ever,” the fact remains: math is the reason we exist. Without math, you wouldn’t be reading this (you can decide if you want to be sad about that or not), and telling math jokes can make you feel smart AND funny. So buckle up, buttercup: here are some groan-worthy, nerd-tastic math jokes!

Talking sheepdog gets all the sheep in the pen for his farmer. He comes back and says “All 40 accounted for.”

Sheepdog replies, “I know, but I rounded them up.”

…and pray you don’t multiply!

What do you get if you divide the circumference of a jack-o-lantern by its diameter?

Last night I dreamed that I was weightless. I was like, 0mg.

I’ll even do statistics, but

graphing is where I draw the line.

How do deaf triangles communicate?

Math jokes never work on me.

I have trouble differentiating them, they aren’t an integral part of the my life, and most of the time they just don’t add up.

Teacher: If you have 10 chocolate cakes and someone asks for 2, how many do you have left?

Teacher: … Ok, well what if somebody forcibly takes 2 of the cakes, how many would you have left then?

Why is beer never served at a math party?
Because you can’t drink and derive.