Home Nonsense Funny Articles What Not To Wear In Europe 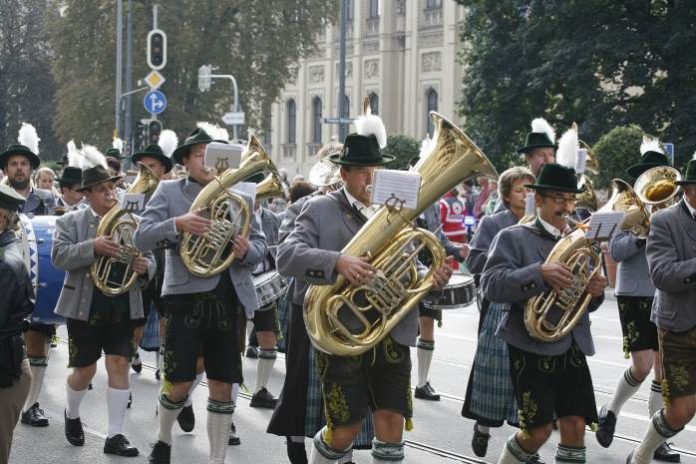 Dressing for success in Europe (or secession, if you are a Brexit supporter) is no simple challenge.

Europe is a smorgasbord of traditions and languages. It is wise to plan your wardrobe before you high-step fashionably onto the continent.

A slight mispronunciation when buying a hat in French-speaking countries may result in 100,000 euros being spent on a house or a horse. And while you can be naked inside your brand new house, wearing the skin of a horse is frowned upon. (Even in France!) The fashion faux pas are many.

Here are some to avoid.

Not the national costume of Greece. Simply smothering yourself in grease will not do. Grease is not appropriate, even if you are John Travolta. No one wants to see that. Rather than attracting admiring glances, you are more likely to attract the police and stray dogs. Both will lick you.

Identifying as a banana is viewed with suspicion in many parts of Europe. Unlike the U.S., not all of Europe has recognized banana equality and you may be refused service or worse. If you are turned over to EU authorities, strict European Banana Law will require you to be straightened upon a medieval rack or German market stall. Bendy bananas are considered to be unnatural creatures and witches.

Don’t try and talk your way out of the situation — a talking banana will appear even more witch-like. Instead simply hire a non-vegan fruit lawyer and cut a deal for shelf life without parole. In two or three days, your continued existence will be deemed a miracle and you will be released to continue your European vacation dressed as a different kind of fruit.

If you dress as a monkey in Europe, you may be captured and returned to the circus. Now, you may like the circus. You may think that this is kind of a cool result. But times have changed. All circuses on the continent are now run by Cirque du Soleil. If you are captured by clowns, be prepared for life as a fancy interpretive dance monkey trained in mime and four star Michelin Nacho concept art.

It is okay to dress as a pickle in many parts of Europe. English is widely spoken across the continent. If you find yourself in a tricky situation, you can say something as simple as, “Uh-oh ! I am in a real pickle now. ” This will immediately raise you to the status of comedy genius in any region where the former funniest joke was about sausages. In more sophisticated regions, however, the same response will result in you being strapped to the sole of a giant fashionable shoe, in order to deport you by scraping you off it on the other side of the border. So know your audience.

Flouncing around Europe in a posh, loose-fitting shirt might seem classy, but there are dangers.

1. Any EU citizen may approach you and commission poetry from you. This is legally binding. Refusal to comply will result in imprisonment in a tower until the work is complete or until you are able to grow a Bavarian-style mustache long enough for rescue personnel to climb.

2. Europe can be surprisingly cold. Nipple rippage may ruin your expensive shirt. On the plus side, this may save you from European Poetry Law. There are no Alpine poets.

3. You will probably die in a Swiss lake having fallen from a schooner while fleeing the attentions of a Dutch poppy dealer.

And, of course, don’t wear out your welcome.