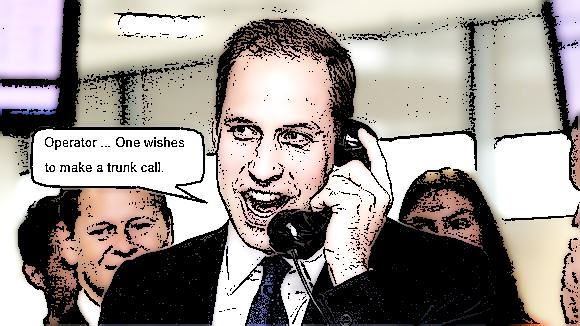 After more than 7 years serving

the UK in its military, Prince William is leaving the armed forces to become President of the United For Wildlife group. Here at Monkey Pickles, we say ” Hippo Hippo Hooray ” to that. Monkey Pickles maybe going from strength to strength but elephants & rhinos don’t do so well in trees. They need all the help they can get.

But what has prompted The Duke Of Cambridge to suddenly reevaluated his royal priorities? Is lil’ Prince George actually a heavily make-upped endangered species or ( as some reports have speculated ) Mothra?

No! That would be ridiculous.

Kate kept her figure far too neatly to have birthed a giant radioactive space monster or a snow leopard. And Prince William has never exhibited a characteristics of either, neither attacking Tokyo nor hiding in the mountains afterwards.

Fatherhood has played its part, however, with Prince William admitting to feeling more paternal & protective to causes he has long been passionate about.

I know how the Prince feels. And his royal highness’s high profile involvement in environmental issues has already had had a marked effect upon me, for I too am passionate. … Passionate for Cookie Dough Ice Cream. And when, one hot September afternoon, I fashioned it into the shape of an Indus River Dolphin, it didn’t last long at all. It really brought the issue home to me.

Although some of William’s motivation

was down to focusing upon a manageable number of royal duties to be selected from a myriad of lobbying worthy causes, the news drew a positive reaction from migrating Manatees in Florida.

Some were disappointed with their meager round of applause … but they were dumbasses and were ejected from the park. Applause isn’t really what manatees do. It’s not that they’re ungrateful, they’re just not equipped for it. Plus, underwater stuff sounds like the adults in Charlie Brown. I’m not sure I’d clap everything either.

As one park ranger put it, ” It is not all about applauding red pandas or cheering Galapagos Penguins. The whole world recognizes Prince William and his involvement keeps important issues such as biodiversity accessible to the public so that they can make informed choices. The variety of species protects all life from devastating pandemics. If we are all the same, we are all vulnerable. ”

as the suspiciously hairy park ranger took advantage of my distraction and made off with my pic-a-nic basket.
It was an act of deception I let go, however, as Prince William and the other fictional characters had opened my eyes to important responsibilities or whatever that I would not soon forget. They weren’t the best sandwiches I’d ever made anyhow. Even the manatees didn’t want them when the picnic basket sunk.