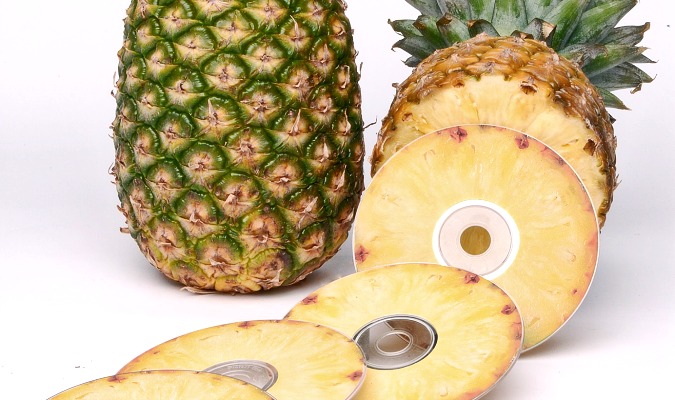 Who among us doesn’t love pineapple? Fresh pineapple is sweet with just the right amount of tart flavor, and it’s juicy and refreshing. There aren’t many people who would not want to have a pineapple in their homes at all times. However, many people don’t realize just how far the potential of a good pineapple can go. When you see the following ridiculously incredible household uses for pineapple, you will be kicking yourself for not thinking of them first. Literally, you will be kicking your left leg with your right foot when you are wearing a steel toed boot. But there’s no need for that – it’s way more productive to just get a pineapple and start putting it to use!

Who lives in a pineapple under the sea? SPONGEBOB SQUAREPANTS! That’s right, everyone’s favorite talking sponge loves pineapples so much that he actually chose to live in one. So if you want your very own SpongeBob, your best bet is to replicate his environment and hopefully attract another one. What you should do is get a pineapple and submerge it in your swimming pool. If you do not have a swimming pool on your property, just get the biggest bucket or container you can find, fill it up with water, and put the pineapple in there. Keep checking back to see if a sponge has seen it and decided to make it into a home. Once you have your sponge, you can try to make friends with it. Just be warned that most sponges aren’t as friendly as SpongeBob. Most of them won’t even respond to your attempts at small talk and will just sit there like they don’t understand you. How rude!

When people talk about how great pineapples are, they are usually only talking about the edible part on the inside. No one ever mentions the outside of a pineapple when discussing its merits. This is a terrible, terrible waste, as the outside of a pineapple can be very useful too. They are rough and scratchy and are great for scratching an itch, especially that itch in the small of your back that you don’t want to scratch with just your fingernails. What if you end up ruining your perfectly manicured nails and the rabid donkey decals you so painstakingly put on them? And if you still have that pesky nail-biting habit, you’ll basically just be rubbing your skin with your nubs, which really won’t accomplish anything. Next time you have an itch that needs scratching, just grab the nearest pineapple and go to town on your skin! You won’t ever want to use just your hands to scratch an itch again!

As much as you love pineapple, you have always been annoyed that eating it with your hands left you with sticky fingers. And then you ended up with all sorts of unwanted crap sticking to your fingers, like straw wrappers and the mouse turds on the counter that are there because your cat can’t do her job and get rid of the mice. Sticky fingers, however, don’t have to be a bad thing. What if you’re getting things stuck to your fingers that you actually want? Next time you eat some delicious and juicy pineapple with your hands, try picking the pockets of everyone around. You’ll probably find that it’s so much easier than picking their pockets without the stickiness. Coins and dollar bills will be sticking to your hands like never before! Now, you won’t have to grab the things you want to steal, just touch them and they’re yours!

The debate about whether pineapple belongs on the top of a pizza will probably go on until the end of time. However, that isn’t what we’re proposing right now. Right now, we’re talking about using the pineapple as the entire base of the pizza. Instead of pizza dough, use pineapple slices. From there, you can build it up with tomato sauce and cheese, and perhaps extra pineapple on top! Those of you who love pineapple as a pizza topping will probably love this even more, and those of you who don’t – well, maybe the reason you don’t love pineapple on pizza is that there isn’t ENOUGH pineapple in each bite. This will make it so that you are eating more pineapple than anything when you eat your pizza, so that problem will automatically be solved. The phrase “pineapple pizza” has just taken on a whole new meaning, and an awesome one at that!