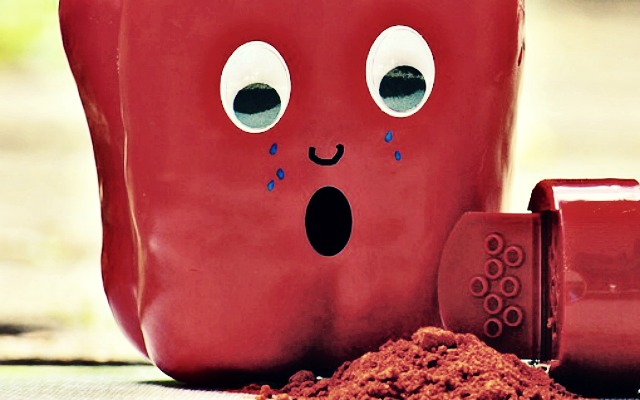 When you think of paprika, you probably think of spicy and exotic dishes. It’s what you use when you want to give those scrambled rotten eggs a little bit of a kick beyond the regular salt and pepper. There is no arguing the fact that paprika is very useful in the kitchen, especially if you’re a fan of spicy food. But most people don’t think beyond that – they assume that that’s where the usefulness of this amazing ground spice ends. Not true, as there are tons of household uses for paprika that will make you love it even more! The following are just a few of these fantabulous things you can do with paprika.

Make Your Own Makeup!

You love putting on makeup every day. Your face is your canvas. The only thing that differentiates you from Pablo Picasso or Salvador Dali is that your art has to be washed off every night, since you don’t want to ruin your garbage bag pillowcase. But there is one humongous problem, and that’s the cost of all that makeup. You spend so much on it that…well, you have to use a garbage bag as a pillowcase because you couldn’t afford a real one. But that problem is about to be solved! All you need to do is start making your own makeup. Have you ever noticed that most makeup is red? And that paprika is the same color?

When you want to give your cheeks some color, use paprika as blush! And for lipstick, just mix paprika with some oil or water and smear that paste all over your lips. If you want to put on some pink or red eyeshadow…well, you probably don’t want that stuff near your eyes. But if you do, go to town!

The only reason you got a job at that restaurant was because you got a kick out of the fact that they sold chicken beaks as appetizers. You don’t really like the job though. You have to wait on angry customers who treat you like you’re some kind of idiot even though you’re a gazillion times smarter than they are. But you have noticed that that pregnant waitress is treated very well by just about everyone. And you then realized that you just have to make yourself appear to be in a vulnerable state as well in order to be treated better by the cretins to whom you have to serve those chicken beaks with cheese. So what you can do is, before work, mix up some paprika into the tepid water that has been on your counter for the past year and a half to make some red paint, and paint a whole bunch of cuts and bruises all over yourself. Those customers will see how messed up you are and be much nicer to you. Well, that or they’ll be completely grossed out by the sight of you and avoid you completely. Either way, they won’t be rude to you anymore, and that’s what matters.

You are sick and tired of being forced to eat your neighbor’s nasty banana bread. You’re pretty sure that it’s made from banana-flavored plastic rather than actual bananas, and that there are actually bits of rancid banana peel in there too. You generally can’t really respond in kind, because you don’t bake. But it’s never too late to start! You are going to learn to make some banana bread of your own. And unlike your neighbor’s, it will be absolutely scrumptious. But just when you’ve perfected the recipe and made the best banana bread you’ve ever tasted, you’ll start replacing the cinnamon with paprika. And what the hell, you can triple or quadruple the amount too. They look fairly similar, so it’s not like you’ll change the appearance of the final product all that much. And then you’ll go over to your neighbor’s house and tell him that you would like to start paying him back for all of his delicious (yeah, right!) banana bread. You’ll get to watch when his face wrinkles up in disgust and his body starts writhing in discomfort after taking a bite of your banana paprika bread, and you’ll get to laugh hysterically in his face.

Spice Up Your Life!

Your life isn’t bad, per se, but it’s pretty bland. Oh let’s just admit it, it’s boring. You often have people suggesting that you spice up your life, but you don’t know how exactly you can go about doing that. Well, now you have a way! Just toss paprika all over everything that you consider to be a part of your life. Now, you have literally spiced up your life. At the very least, you have certainly made your surroundings a lot more interesting to peruse. Red powder all over everything will give you vibrant bursts of color all over the place. And just think of how it’ll feel when you put your paprika-covered socks on your feet, having forgotten that you had cut your toe when you kicked that cactus a few days ago. When the paprika embeds itself into your broken skin, the feeling won’t be pleasant, but hey, it definitely won’t be boring!