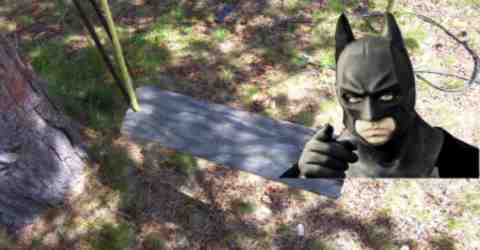 and silently. Earlier in the day, ten year old Justin used his mother’s cooking oil to grease the metal tracks. He slid out and landed in the flower bed. A moment of panic hit him until he saw the pansies his mother planted were not crushed. Sighing in relief and with a mental note to cover the footprints upon his return, he walked across the lawn toward the house next door.

Blackness pervaded the structure, as if the light from the full moon couldn’t touch it. The entire Von Rhuel property was overgrown and neglected, yet no fence existed to prevent curious children from venturing in. Rumor was a few kids had disappeared at the hands of the mysterious family, but Justin didn’t believe such tales. He and his buddy Nolan, who lived on the other side of the Von Rhuel property, had never seen anyone around the house. But they did want to check out one rumor.

Earlier in the day,

a few older kids down the street were talking about something quite unbelievable. So the boys planned a rendezvous at 12:10 am that very night to check it out. They were to meet at swing beneath the oak tree they had so often eyed. That oak was the biggest tree in the neighborhood. And both sets of parents had forbidden the boys from ever going close to it. The adults should have known such a ban would only further encourage their curiosity. Further, the movie, “To Kill a Mockingbird” had been on television a few nights before and the boys had no fear of a Boo Radley character. As Justin and Nolan met under the tree, they saw the swing was very different from any they had seen before.

The chains hanging from the oak limb

were black. The seat was a standard two by twelve, but had a symbol burned into the three foot long plank. Justin looked at Nolan and they both peered at the fish pond nearby. Those older kids spoke of the ten foot diameter pond. They mentioned huge, orange fish with no eyes in the inky black water. Legend was, they said, if one was to swing over the pond, drop in some pebbles, Batman would appear. Not an actor dressed as the caped crusader. The real, true Batman. Justin traced the bat symbol with his finger in the moonlight. Nolan reached down to scoop up a handful of gravel. After dropping some pebbles into Justin’s hand, both boys sat uneasily on the swing seat.

they took a few steps back with the swing under their behinds, sat and kicked off to start swinging. Moving their legs, the swing began to climb. Back and forth they went, with only the sound of the chains creaking in their eyebolts breaking the stillness of the late summer night. Justin tossed a pebble into the water on one of the forward swings. Nothing moved in the dark pond. Nolan pitched two rocks at the next opportunity. Still nothing happened. Emboldened, Nolan threw an elbow into Justin and at the next forward swing, both boys tossed all the pebbles into the pond.

On the backward stroke,

a dark cloud arise from the pond and surrounding grass. When they were over the pond, the boys entered the cloud screaming. The swing became unstable as they thrashed about, going too fast to stop. A sound from the house caught their attention, as they were engulfed in the black cloud. A tornado of darkness appeared from the area of the basement. By the time the swing stopped, the boys could no longer see the moon and the air around them was alive.

A man appeared, grabbed both boys by the arms and pulled. Their eyes were closed with fright when he released them at the edge of the property. Justin scratched his arm and realized he had multiple mosquito bites. Away from the pond and in the light of the moon the boys could see thousands of bats dipping and diving, by all appearances, gorging on the mosquitoes the boys had released. The bat man, or was it Mr. Von Rhuel, was nowhere to be seen.

The moral of the story is:

Don’t believe everything you hear, and never swing from a tree after midnight.

You May Think It’s Funny, But It’s Snot (And It’s Frozen)!

7 Funny Words That Start With O