Home Nonsense Funny Articles Acronyms That Mean “Blah Blah” And How To Use Them To Seem... 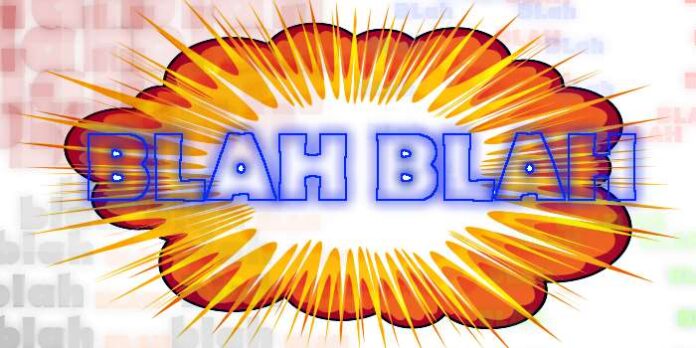 Technically, the generic phrase “Blah Blah” defines every acronym ever conceived by the forces of evil. All acronyms are spawned in the underworld because the devil’s workshop has an exclusive.

All the little upstarts line up their hot seats in a row, armed with various sharp doodads, like:

All day long, they merrily disembowel the English language to create “Blah Blah,” or if you will, acronyms.

Of course, if you are a dog, you hear everything your owners say as “Blah Blah.” They could be teaching you the latest Tweets or singing Inagodadavida. It’s all sounds the same to your floppy ears. For instance:

· Your boy says “Go fetch”; you cock your head quizzically as if to ask, “’Blah Blah’ say what?”

· The old man tells you to bring him his ratty slippers; you run from the room, hot on the scent of this mysterious but obviously highly desirable “Blah Blah.”

If you are a human in the market for a new car, better button up your flak jacket because the acronyms are going to be flying fast and furious. “This baby comes fully loaded with ‘Blah Blah Blah Blah Blah Blah’ and ‘Blah,’” says the salivating young car lot coyote, who has pulled on a freshly tanned sheepskin for just this occasion. “’Blah Blah and Blah Blah Blah’ are optional, owwooo!”

Sooner or later, if the sheer weightlessness of all this non-information doesn’t send your brain floating straight into the stratosphere, you’ll find yourself locked in a contest of consumerism with Wile E.

“What about that new ‘Blah Blah’ I’ve been reading about?” you say in a spirit of carbon monoxide-inspired camaraderie.

“Oh, ‘Blah Blah’? You betcha. It’s listed right there on the sticker, ” the salesperson replies, tracing a slimy trail down the car window with a wet dew claw.

“How much extra is ‘Blah Blah?’” you spew, getting into the spirit of the repartee.

“You can add ‘Blah Blah’ along with ‘Blah Blah’ for only 2 gazillion ‘Blah Blah.’” Smelling an easy kill, your new best buddy pops the hood of the beast, inviting your personal perusal of the engine’s “Blah Blah Blah.”

Before you know it, you’re in the groove, talking the talk and walking the walk like a stalking puma. You’re well on your way to bringing home a big, shiny, machine with emissions that help melt glaciers and “Blah Blah” up the kazoo.

BTW (“Blah Blah”), on the virtual front, you might think you’re pretty social network savvy, but try baiting a hook with “Blah Blah” and you’re liable to snag some far bigger fish. Drop a line with “LOL” on the end and you could reel in a big one – say, LMAO or 2BZ4UQT (translation: “Blah Blah,” “Blah Blah”). Nice trophy catch, but not very good eating.

No need to fret. Just pen yourself a handy little cheat sheet so you can read and respond like a pro. In column A, list all of the hottest acronyms. Here are a few suggestions:

In column B, scribble a brief definition of each hipster handle. No time to decipher the acronyms? No problem! Just wad up the crib sheet and throw it in a big green bin labeled “Blah Blah.”