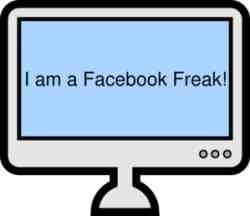 An Egyptian man went out of his way

to give his daughter the most American name possible.  In a land where names can be as exotic and beautiful as the land itself, (Names like Cleopatra, Ebonique, Tahirah) one girl will raise her hand when the teacher asks if Facebook is present.

social media as a huge influence in his countries regime throwing revolution.  Thus, naming his daughter after the world’s biggest social media outlet.  While this writer appreciates a countries people standing up for their freedoms, liberties, and democracy.  I can’t help but think one of those before mentioned words have made a much better name?  Will the megalomaniac Zuckerberg issue an intercontinental lawsuit on an infant for copywrite infringements?

I really hope that

this doesn’t become a trend.  I cringe to think of the day as an elderly man seeing a cashier with a name tag that says Twitter.  Or hearing some parents call after their twins, You and Tube.  Would we all not be proud to see our Olympic gold medalist Google Plus Davis on the podium?  Or tune into the evening news with Pinterest Jones?  Will we one day we will watch the swearing in of president Instagram Washington?  Maybe so, along with his Vice president, Monkey Pickles Jackson.

Help Us Write A Never-Ending Story

The Continuing Adventures Of Tartan The Ape-man, Part 2: The Great White Hope