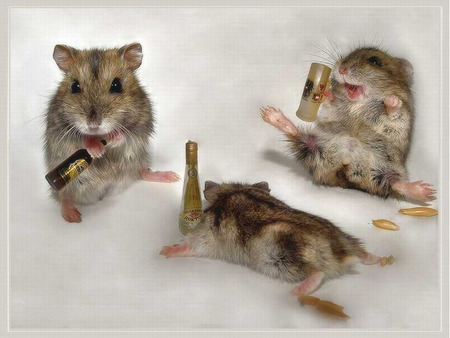 Had his ancestors paddled their way across the Atlantic on the backs of their servants to escape guillotines of revolutionary France for this ?

The Count Froo-Froo Du Faa Flaa told himself he should have known better. Since he became principal at Low-down High Middle School he had strived to bring culture to Parirsish, Monkisota. The final year students were behind in the sciences & if this did not come off they would fail the subject but his faith in combining the outstanding practical coursework with homecoming was shaken.

The Human Hamster Ball was not going well. There was the height difference for a start and a day was beginning to seem too long for a dance. He watched the small figures totter & wobble across the sports hall floor. Were they drunk ? Tired ? Had they been rolling around in the hamster balls too long ? And the hamsters looked a little drunk too.

Hamsters where notoriously skittish an often had a sly tipple to calm their nerves. They had rather overindulged after scattering in panic halfway through ” ham sandwiches ” as Froo-Froo was announcing what was available to eat at the buffet.

Once the confusion had calmed down another oversight regarding the buffet became apparent as the hamsters stuck rigidly to the ” 1 food item of each kind on your plate ” rule but stored several more in their cheeks. … as did Joseph Botnosh … but he had a sexually unhealthy mind.

What else could go wrong ?
” You boy! Put that dodgeball away. Sally, I warned you not to bring your cat. Joseph! Don’t kiss the rodents! A nice girl will pick you one day ….. from a police line up.”, Froo-Froo added under his breath. That boy was not going to turn out well. Certainly that step dad of his, Dickie Gear, was rumoured to be into some strange fetishes … not least of which was being part of a flight of stairs one night a week. If you yourself have a fetish or two you like to explore, Visit site porn-hd.xxx to find porn HD. What was that now ???
There was some goofy looking giraffe gazing through the bay windows. It seemed in a trance. Transfixed by the giant ornamental hamster wheel centre piece … as if the big wheel reminded it of lost glories & happier times.
” What are you doing here beast ? ” bellowed Froo-Froo waving his arms at it. ” Shoo ! Shoo ! ”
With a quick glance behind it, to Froo-Froo’s satisfaction, the startled giraffe scampered off … mere moments before Froo-Froo’s eyes widened & he dived neatly to his left as a giant hamster ball crashed through the bay windows scattering rodents & students alike. One hamster was catapulted in to Joseph’s back. Ouch…. that was going to take some effort … & a lot of soap to rect-ify.

Froo-Froo watched in amazement as the ball rolled a halt against the opposite wall. A hazy figure inside the translucent sphere righted itself, unscrewed the hatch & exited with a somersault to land in front of Froo-Froo. Froo-Froo was secretly impressive … not as much as if the figure had’t landed on it’s ass … but quite impressed.
It was some kind of large monkey thing.

” My goodness man! Who are you ? ” spluttered Froo-Froo dusting himself off & taking a better look at the monkey man.

” I am Hintz ” the creature beamed in a blissful unsettlingly disconnected way. ” I like duct tape.”

Welcome To Monkey In A Dryer

8 Funny Words That Start With X

What Sci-Fi Gadget Should We Already Have By Now?