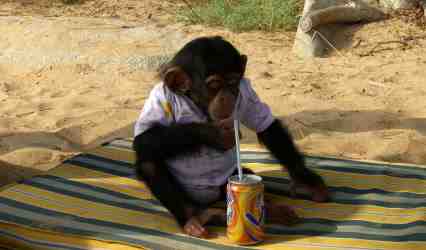 One little chimp says no thank you to “Monkey Pickles.”

What’s that you say?  Yes, it is true.  This little poo slinging critter who goes by the name Lurman wont be caught following the norm.

“Lurman’s not going to follow stereo types.” Lurman’s owner and trainer Sigourney Weaver said.  (No, not the actress who starred in the 1980’s film “Gorilla’s in the Mist.”) “Lurman is an original.  He hates bananas, and almost every other fruit except for grapes.  Or monkey olives as we call them.”  she said laughing.

for those ‘go with the flow’ primates.  He detests those ‘sell out’ chimps who wear the hats,  bellboy suits and dance around.  Has no time for circus monkeys.  He can’t figure out why George is so curious, or what Kong saw in Fay Wray to get himself killed over.  (Some King huh)  And don’t even ask Lurman about that dummy Clyde who rides around with Clint Eastwood, or the moron from the TV show “BJ and the Bear.”  If you do, be prepared to duck quickly.

“He loves Caesar from the film “Rise of the Planet of the Apes.”  Weaver said.  “Lurman loves his independence.  He watches the movie every week.  And one night, I ..”  Weaver stops and looks around.  “I thought I heard Lurman speaking.  At first I thought it may be the movie.  But when I looked in his room, the lights and TV were off.  I got a little scared.”  Weaver finished whispering.  Lurman also likes his best friend Harlan the gorilla.  Also known as Grape Ape.  He was born with a rare condition that makes the hair on his body grow purple.  Harlan also loves grapes.  And wine.

What’s The Worst Way To Watch A Scary Movie?

Great Works Of Art, Edited For All