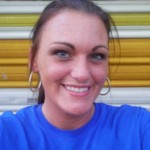 1: How does being selected as Pickler of the Month change your life?
A: Being selected the FIRST Monkey Pickler of the month has changed my life because, now
every morning when I wake up know that someone out there enjoys the same silly things I do…and its OK to take back hamburgers after you put a few hairs in it just to get another one..
2: What was your first impression of Monkey Pickles?
A: My first impression of Monkey Pickles was..you know that brief moment on a movie that when something good happens, and you hear those angels sing like they are opening up the gates of heaven..that harmonious..LAAaaaaaaaaaaa…well thats how I felt..
3: Where are you from?
A: I am from Good Ole Paintsville, KANtucky…home of the Kantucky Apple Festival…you’ll never meet a stranger, and if you do meet one, we hold them for ransom, cause they are prolly worth something..
4: What is the strangest thing you’ve ever eaten?
A: The strangest thing I’ve ever eaten was my Mamaw’s FflorescentYellow chicken and dumplings..too much yellow food coloring, but they were good, even if they stained your teeth for a week.
5: 2 People you would like to grab a cup of coffee with?
A: Two people I would like to grab a cup of coffee with would DDEFINITELY be Steve Carrell and Will Ferrell…I love those guys!!
6: Why do you like Monkey Pickles?
A: I like Monkey Pickles cause its cute and very entertaining.
7: What vegetable/ fruit do you most resemble?
A: What do I resemble…uummmm, thats hard, I guess Im gonna say if I were a fruit I would be a Peach…cause Im soft, and delicate,…and I bet I taste good in pie!
8: Which ancient place would you like to go and who would you take with you?
A: I would LOVE, LOVE, LOVE to go to Rome! All that Greek God stuff is HOT!, and of course I would take my boyfriend “Mr.Romantic” Brian Pinson…luvs him!..xoxo
9: Who is another member of Monkey Pickles you enjoy reading, interacting or give shoutout too?
A: Id have to give a shout out to Nicholas Jackson, he’s on there alot, and he’s a faithful Pickler..
10: What is your believed power animal?
A: I dont really know if I have a believed animal power, but my lil boy says I growl like a hungry Puma when its time for homework..
11: If people were to hang out with you on typical Saturday afternoon what would you be doing?
A: On a typical Saturday afternoon if you were hanging out with me you would be..AMAZED at my laundry skills…MYSTIFIED by my speed of unleashing the Power of GREYSKULL on my children if they keep up the constant fighting, and SPEECHLESS with how GOOD Im getting at pretending that I LOVE to watch my boyfriend play his PlayStation Football game…and I wouldn’t rather be doing ANYTHING else!!
12: If you were to work for Monkey Pickles what would you do?
A: If I were to work for Monkey Pickles..hmmmm, I dont know what I would do…but Im lookin for another job, so Im open for suggestions…
13: Music Style?
A: I like anything that is played on Hee-Haw
14: What’s funny childhood moment?
A: My funniest (and most disgusting) childhood memory is when my cousin Nick put dog shit on my bologna sandwich while we were playing Lil House on the Prairie, and I thought it was mustard and ate it…yea, I can laugh about that now, but back then…not so much..
15: How would you like to change the world?
A: I would like to change the world by making it mandatory that ALL mothers that constantly rag on their children, whether they be 16 or 36, if they simply have NOTHING better to do than make out lives miserable I would l send them off to a home for the “NEEDS TO BE BITCH SMACKED BUT IM TOO AFRAID TO DO IT MYSELF”…I love my mother, but I really dont like her sometimes..bless her heart…she needs a Valium Candy Necklace in the WORST WAY!!