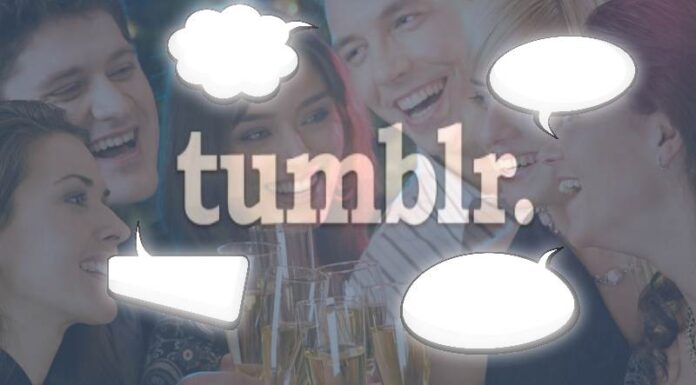 Magical blogging site on the interwebs, that is filled with GIFS (not gifts), memes (not me mes), and teenagers across the globe who just can’t and show all their feels on a daily basis.
Did you pick up the lingo there?
If you did, welcome my fellow Tumblr user, and if not… Have you been hiding under a rock?
If so that’s alright, because today I will be teaching you some of my favorite Tumblr lingo that I use everyday, both on and offline.

Tumblr was launched by David Karp in April of 2007, Mr. Karp has successfully helped me procrastinate in finishing Spanish and Algebra homework, rather he believes it or not, he has helped thousands of people across the world also so do that.
However Tumblr isn’t just for posting pictures like Flicker, basic updating what you are doing like Twitter or reading annoying status updates like Facebook, it’s a bit different. Tumblr is almost like all of them, except for the knowing-everyone-and-putting-up and with-their-drama thing. Tumblr is amazing.

To be apart of Tumblr, it isn’t mandatory to know these terms, but if you want to fit in, and want to experience Tumblr to it’s fullest extent, you should know a few.

: Fandom
A group of people who all support an artist/character/actress/youtuber pretty much anyone. these group of people (in my experience) are die heart fans. Don’t know what I mean? Just go on Tumblr, type “One Direction Fandom” in the search bar, and everything will be real.
Overly obsessed people who are fans of the same group/show/person ect.

: Fandom Fight
You may be thinking that this s when two fandoms clash, you would be correct. However, this also means when fans inside of the fandom clash. So, I’m inside of The Jonas Brother Fandom. Since they haven’t released any new music in the past few years, the fans from TJBF went the Justin Bieber. As a result, these are two fandoms that will constantly fight, and there is nothing you can do about it.

: I just can’t! or I can’t even right now!
So these terms are generally used in fandoms. When something is just so sad, disappointing, or disturbing, just end the conversation with “I can’t” or “can’t deal with this.”
For example, if you seen that Justin Bieber got a new girlfriend that isn’t you and you are a Belieber, most would say “I can’t” if they are Tumblr users.

: OVARIES!
Since most fandoms are majority females (sorry guys), it’s something that is thrown around an awful lot. It’s being far too excited about a man who is overly sexy and all your feels just explode in your ovaries.
So, Ryan Gosling shirtless = OVARIES.

: Ships or Ship, or I’d ship that
Ship is kinda like an OTP(One True Pair), I think they fall under the same category, except Ship means something a bit different.
Shipping is when you hook up two people who clearly don’t belong together into a romantic relationship. So, a Harry Potter and Draco Malfoy, they would be “Drarry Ship”. Look it up, They’re pretty intense.
OTP is One True Pair, my one OTP is Charlie McDonnell and Alex Day, although they are best friend, I don’t care, ship it, and then… OMG YOU GET ALL THE FEELS!

: All my feels or You get all the feels
Overly excited.
Seeing your New Moon from the Twilight Saga and Jacob black takes off his shirt and you are just like ermahgerd (oh my god, come on keep up!), and all of your feels are just flying all over the place because you can’t control your emotions.
Um… This link can explain it better than I can.

GIFs
The Graphics Interchange Format.
Compressing video, into reduced time, the proper way to say it is “Jif”.

If you did not understand anything thing in the post, the link is your best bet.
If you didn’t understand the song… I can’t even with you.