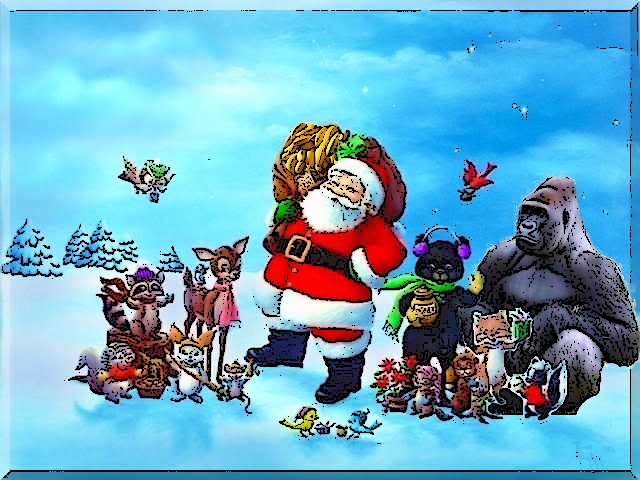 Did you miss Christmas ?

So did this guy!
… Or, at least,  he thought he had.
So, during my hiatus ( not bad breath ), I present to you a festive tale by the  talented


Jaley Phelps aka The Invisible Seductress.

In a forest so enchanted, no humans have been … there’s a wintry scene, up a hill, ‘round the bend. The Great Deer has called for a gathering there, he has information, he feels he should share.

There are mice on the scurry, hooting owls in the trees and a crowd of little bunnies … you can count if you please!!!Climbing out from her home is a sleepy box turtle; her mom LOVES to rhyme, so she named her Myrtle!!!

A lizard is hanging upside down, from a branch; Naughty skunk wants to join … should we give him a chance? …………..

Some frogs are arranged, in a row, on a log, by two clever Badgers drinking homemade eggnog.

A squirrel is digging and searching for nuts. He loses and drops them; he’s such a big klutz!!!

The animals are happy, what a beautiful season! But why are they there? Great Deer shares the reason:

“Mr. Bear is so helpful; we all call him “friend”! And if you need a paw, then it’s FOUR that he’ll lend! But if he always goes sleeping, at the first sign of snow, the magic of Christmas, he NEVER will know!!! He is away from the joy that this season can bring … by the time he wakes up, it’s already SPRING!!!”

“But what can we do?” Mrs. Porcupine hollers “We can’t wake him up; we would be such a bother!”

The animals agree and they chirp and they chatter. Great Deer stomps his hooves, to stop all the clatter.

“We won’t wake him up” Deer states, to correct her “Let’s bring Christmas to him, at the end of this winter! We can string rows of garland, paint cones made of pine and hang shiny ornaments on a tree from a vine!”

“Let’s bring him some goodies!” The skunk says with a smile “He’s probably STARVING; he’s been sleeping a while!! We can get some big honeycombs, to place by his door, the bees are so generous and they’ll always make more!! Fruits and berries can be hung by HIS chimney with care; Bear’s rumbly tummy soon WON’T be THERE!!”

They were all so excited, they just couldn’t wait! The spirit of giving makes a GOOD Christmas G-R-E-A-T!!

Soon the snow would all fade and the flowers were in bloom and Bear awoke from his slumber, to come out of his room.

He yawned and he scratched and he stretched VERY loud, all the animals gathered; there was quite a big crowd!

By the time Bear stepped out, they had started to sing, it was the very first Christmas……..