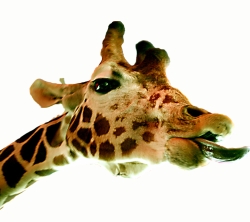 George woke up all of a sudden. Today his new life began. Never again would he work long hours at the diary delivering absinthe pizza to sock puppet table lamps for Bimblebutt Fluffybottom, the antisocial bee. This was largely because it was a dream & he had never been a 12 year old pizza delivery boy named Janet, dammit. … Or had he ???? … Maybe he was like Wolferine. Wolferine couldn’t remember stuff either.
George expectantly lifted a hoof to his face & stared at it with heroic concentration. He strained & strained training to will cutlery to spring forth from his hoof. Tense minutes passed. George was about to give in when he began to feel …peculiar. ….  The shocked giraffe’s eyes widened in utter amazement ….. He had pooped a little.

George’s eyes glazed over. Lickety Split was his favourite popsicle. He didn’t get to enjoy them very often, they usually melted on the way from Croatia.
” George! 8 minutes! … And stop licking that hairbrush ” said Marvo shattering the illusion as he turned to leave.

Meanwhile, in The Big Top, Jammy Knees the cricket had climaxed … with his signature impression of incremental glacial advance.

The 65ft tall cricket’s life had also been transformed by the circus. The former New Jersey traffic cop had fallen upon difficult times due to his love of doughnuts. His weight problems couple without the constant emergency call ins for an officer down, due to doughnut jelly running down his front saw Jammy fall upon hard times. After that it was doughnuts doughnuts doughnuts until a concerned neighbor called the fifth emergency service, The Performing Arts Council, and the circus winched Jammy to safety & a new life. They weaned him off doughnuts with Krispie Kremes but with no jelly dripping down his chaffing thighs he discovered his amazing talent for impersonating glacial advance. And the crowds rolled up ….. glacially … or by nipping outside for a cigarette until the next act was on. Nevertheless Jammy justified his billing, as the circus was really short of acts at the time.
His historic finale drew a standing ovation … from one child … but it turned out she was just a bit cold. It was an extremely good impression. Still it was less disappointing than the standing ovulation from  last week. Just because they were at the back in the cheap seats, did they think he couldn’t see them? It had all been very embarrassing.

George, however, was more of a circus natural. He loved the crowd … when the weren’t  busy doing that sort of thing themselves. He didn’t need to be winched in by Iquitee Card holders while they rested between jobs ( something that you had to be incredibly tired to do if you were on stable duty in the elephant house ). Not George. No. He’d been spotted. …. He still was spotted.

George wasn’t the only George at the circus. There was also George.  And Mr. Clowny wouldn’t let plunging to his death stop him entertaining the crowd ….. again. He hadn’t been the funniest clown but he did seem to have been very popular with desperate middle aged women. And was now he was finest darn mantelpiece  ornament a circus could have … although what a fireplace was doing in a marquee is anyone’s guess. But the clown’s ashes now resided proudly in the centerpiece urn,  mixed in with custard powder… It was his pieing wish.

A drum-roll brought hush to the crowd inside the Big Top.

There followed an awkward couple of minutes when nothing happen & it dawned upon the audience that this might be a literal request. Fortunately, Billy Ray step in to save the day … as he was also in between jobs ( It wasn’t easy being a waiter when you were so achy shaky ) & piped out a medley of his 1 annoyingly catchy hit causing the roof to recoiled to a safe height. The walls had it worse though because, as everybody knows … walls have ears. Still, if they moved, people might say that Billy Ray had brought the house down … & that just wouldn’t do at all.

Surprisingly the audience didn’t flee …. although this was largely down to The Ringmaster having locked the canvas.

” Yaaaaaaaaaaaaaaay ” trilled George, mostly to himself. He was ready to WOW.
But how had he managed to get up here. He couldn’t climb ladders. …. Oh yeah. … The winch. George Giraffe frowned. He wasn’t a 20 ton cricket, he wasn’t.

Just close your eyes & think happy thoughts. …. Aaaargh! Open Your Eyes! Open Your Eyes! He chided himself as scrambled back onto the high wire platform.
George looked down breathlessly at the safety net below. He was glad it was there but he did feel sorry for the dolphins. What the deuce ?! Did one of them just flip him off. … Okay…. he felt sorry for most of the dolphins.
George tried to refocus & compose himself … but the musical aspect was proving to difficult so he settled for just concentrating a bit better.
He took a deep breath … *fart* … oops. He slightly shallower breath, reached behind himself & yanked.

Far below the crowd gasped in disbelief. A 12 year tugged at his father’s sleeve elbow for attention as he pointed up at the scene. ” Daddy, is the giraffe going to climb on that & ride it “

George had indeed finished mounting & was about to commence pumping away when he spied the child’s mocking finger. Clearly the brat was in cahoots with that dolphin. George would give him a crafty kick after, during the autograph session. But the show came first. It was a spectacle that George sometimes performed twice a night … but never quite like this. He began to pump.

Gingerly George pedalled his stunt cycle onto the high wire but it was not his usual cycle. No. Tonight the daredevil’s equipment was made from toast.

In retrospect it had been an error to put Stupendo The Sorcerer next in the schedule as his doves escaped & headed straight for the scrumptious stunt bike.

” Stupid Enzo !! ” ( George could never get his name right & thought the magician was from Italy ) wailed the giraffe as a dove chipped at the rear wheel. ” Your pecker is destroying my rear end !!! “

Billy tugged on his father’s sleeve again. ” Daddy! Daddy! Is the giraffe going to fall? … You gotta climb up an’ save him.” But Billy’s dad had terrible vertigo. So bad was it that he had specifically requested ringside seats which he was lying down in front of. Curse the giraffe, it was the one act that the ring perimeter didn’t obscure. Fear gripped him as he met his son’s gaze.
” …. B-b-but …. er … ” he stammered.
Billy looked puzzled.
” I don’t think butter is going to help Daddy ” he observed with a grounded wisdom that would see him grounded for the next week.
But … er … it was too late anyway as the toasty rear wheel was pecked away. George blacked out as the bicycle disintegrated beneath him, deliciously coating a dove in breadcrumbs as it’s debris rained down.

George plunged to his certain death.

The giraffe came around to sympathetic applause & struggled to his hooves. He was in the safety net. He felt embarrassed. The performance had been a failure & yet the crowd applauded the attempt. George felt he must acknowledge their kindness in some other way than not kicking Billy.
After a moments thought, he bowed to them & shed a tear …… although this was largely due to the dolphin that had just butted him in his ” finale’ ” .