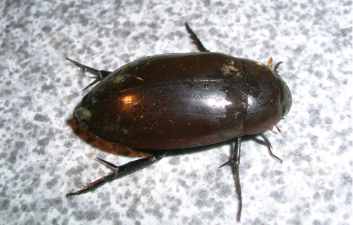 in our house. We started calling him Richard Petty, Jr.  Don’t be critical – it’s the only NASCAR name that immediately came to our minds.

He was one of those flat water beetles.  You know, the kind that can squeeze themselves down to the size of a nano-atom, fit through the bricks, concrete and mortar that are absolutely impossible to penetrate, and then pop back to their original size.

When I first saw him, I kinda freaked.  We were lying in bed, ready to turn the lights out when I spotted the black culprit.

Me: OMG!  There’s a cockroach on the top of the wall

Husband: It’s not a cockroach; it’s one of those water beetle thingys that come in when it’s raining.

Me: If it’s a water beetle, why doesn’t it like rain?

Husband:  Google that and find out.

Husband: Get him?  He’s at the very top of the wall, near the ceiling.

And so our evening went.

I realized I really didn’t have to freak out anymore, because I’m not worried about the freaky-can- change-it’s-shape water beetles.  It’s cockroaches that I can’t stand.

It’s not just because the little bastards scare the crap out of me are supposed to be dirty.  It’s because they are the only living beings deemed to survive (and thrive on) a nuclear war.

I slept soundly, glad it wasn’t a roach.

When I woke up the next morning, my eyes went to the place in the ceiling where I last saw him.  He wasn’t there.  So I sat up and searched, and sure enough, he’d stayed the course and made his way to the next wall.  Hence his name.  He was chugging right along on his own private racetrack.  This went on for a couple days, and he always took an entire day to work his way around to the next section of wall.  We live in an old house, with very high ceilings, and even my hugely tall, 6’6” he-man husband can’t reach even half way up.

So we let Richard stay.  He seemed quite happy.

He was getting his exercise.  He never deviated from his path.  He didn’t bother us.  And he was staying warm and dry.  (Again, kind of weird for a water beetle, but hey, I won’t judge).

Despite the fact that I was being lenient on allowing certain Coleoptera to co-habitat in our home, I started to wonder if this really was a water beetle, or possibly something different.  I did what any logical thinking person would do: I got on my iPhone and asked Siri.

I normally don’t take pride in telling my man that he is wrong, so last night in bed, as we were watching the slo-mo version of NASCAR, I casually mentioned that I looked up the origin of our new pet online.  As soon as I said stink bug, he threw back the covers and went into immediate action.

well our entire marriage. (He normally has two speeds – slow and slower).  In the amount of time it took for me to get up out of bed, he’d grabbed the ladder, a roll of paper towels and some kitchen gloves.  Before you could say “air freshener”, he’d scooped up Richard, scrambled down the ladder, ran down the stairs and deposited him on the front lawn.

I kinda miss the little guy, but not enough to pray he doesn’t go around telling all his friends and relatives about the great racetrack he’d happened upon.   However – just to be safe – the ladder, the roll of paper towels and the kitchen gloves are staying in the bedroom for a bit longer.

What Was The Best Cafeteria Lunch At School When You Were A Kid?

How to Make Gummy Bears