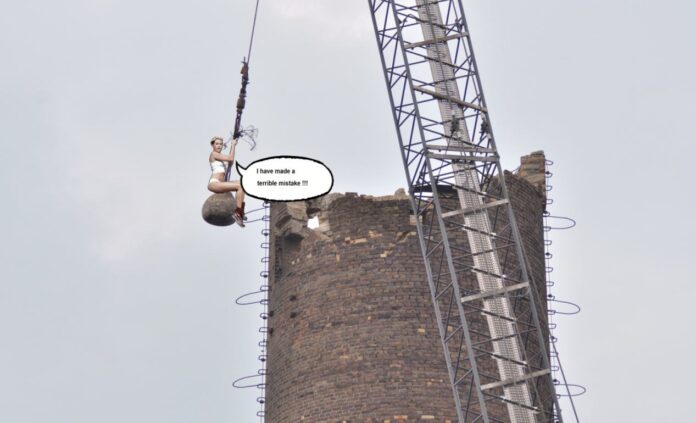 With all the negative press

Lady Gaga had to endure, one has to wonder why Miley Cyrus thought appearing stark naked with a massive ball between her legs was a good idea.

True, Miley needed to make an iconic statement in her break through video so she could reinvent herself and finally bury the specter of the squeaky clean Hanna Montana persona … whatever that was.
So, fair play … Mickey Mouse was never that brave.

And you can’t say that she hasn’t made a big impact.

Over 62 million people have viewed the video on YouTube in just 3 days. That’s everyone in the UK!
… I mean, not literally …
… It is probably all down to a few high school kids.

Granted, Miley has reinvented herself … but as what ? What is her message ? Her new image ?
Presented with such a dusty, desolate and lumpy visage in the video, some would say, ‘rough’
…. but enough of the debate over her ass. That’s just a cheap shot. Every video should have a big end and I certainly couldn’t have made the same script work any better … although no one would ever confuse me with Hanna Montana again.

Also, get dressed. You’re in a glass house. Everyone can see your bits.
Everyone in Britain.
‘Cause that’s what we do now.

In her video, however, Miley does not live in a glass house. It is not really a house at all … and I don’t think she lives there. If she does, she really needs to get a new agent.
The construct in the video looks more like a partially completed bus shelter … or a totally completed library. Not that I am suggesting that we are supposed to deduce that Miley’s music video relationship was played out entirely at a bus stop.

Also, I wouldn’t do that to my crib or my partner’s crib, especially as you’d only have to walk round to the front to get in … with it only having 3 walls and all.

I’d be like, ” Baby ! There’s only 3 walls … 2 walls …. a wall ! … Why’d you have to go and do that ? You know we can’t afford to hire construction equipment on my pizza delivery salary. And you’re not wearing any of the proper safety gear. … Aaaw Man! There’s rubble in my pizza uniform …. That’s gonna stain. … An’ look at the state of the place …. The bus is never gonna stop here now. “
It is enough to put strain on any relationship.

Anyhow … Back to the question of image.

I am not sure what the image Miley is trying to portray. The video doesn’t make much sense to me. I mean, I get why she is crying at the start. I would be crying too. But how to interpret the lyrics?

Take, “Don’t you ever say I just walked away”

Well, you did. You were walking away all through the video. Sure, you fell over a couple of times .. but you kind of were. Okay, I guess your partner shouldn’t say that you did since he/she was out when you demolished the crib but 62 million British people saw you.

Also, “I can’t live a lie, running for my life”

Presumably this lie is pretending to be a construction worker although the penalty for that masquerade is more severe than I expected it to be.

“All I wanted was to break your walls. All you ever did was wreck me”

And now, you’re not coming down. It slowly turned, you let me burn. And now, we’re ashes on the ground”

This again ties into the qualified construction worker deception, as this verse seems to suggest Miley’s former partner was became trapped on top of a tall structure Miley built with reckless disregard for fire safety regulations.

Then there is more breaking of walls or balls & being wrecked a lot. All a bit unseemly.
Anyhow …. Good luck building a new career with those faked construction skill, Miley. You may have left Hanna Montana far far behind you but your video is still a state.