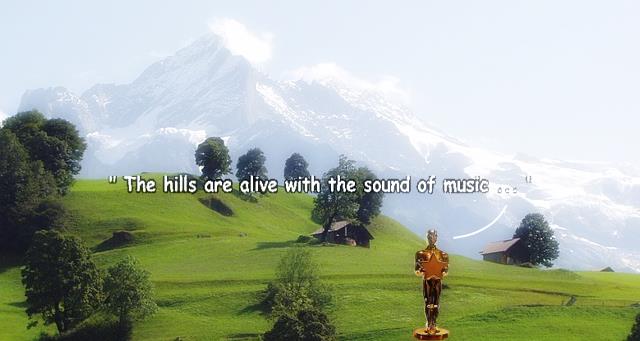 reinvented herself at this year’s Oscars, not as a waffle iron or the concept of shame ( both of which have been around for ages … although only the waffle iron can be found being used in Congress ) but with a standout musical performance.

Gaga did not take to the stage all nuded up or wearing a dress made of shrimp but opted for a controversial full length evening meringue and reigned her extrovert nature to such a repressed extent that she actually turned British. It was the level of grand transformation that only the likes of grizzled royal pop jerky, Madonna, could have pulled off.

The hills are alive with insects

But moving away from the suggestion that there are chrysalis dwelling insectivore pop divas ( The Lice Girls, Justin Beetle, Mantis And Son ) Gaga turned up the class with a crisp rendition of “The Hills Are Alive With The Sound Of Music” resplendently couched in an English accent so clipped that would have made Dick Van Dyke’s ears sting.

Despite the stage resembling a smooth flat post apocalyptic wasteland interspersed with ghost trees, the total lack of hills did not appear to sour the experience for either Gaga or The Oscars Audience. Even when it became obvious that there was no landscaping category and that Gaga’s unopposed efforts would not be rewarded with a golden statuette, did the songstress like a terrifying 100 story radioactive lizard on its birthday.

Gaga was widely praised for her performance but also for her professionalism when Julie Andrews burst onto stage. In upsetting scenes, Andrews ( presumably still unaware Allied Forces had triumphed in WWII and attempting to flee German oppression ) flung her arms around Gaga in what may have been a desperate plea for political asylum. Sadly, with The Oscars not a sovereign state and Gaga not being its queen, the pop star was unable to grant the request and Andrews was force to flee or risk imaginary capture.

Soon, however, it was Lady Gaga’s mugshot that was plastered across front pages everywhere as it became apparent that most people agreed she had stolen The Oscars in a backstage heist that organizers insist never took place.
Police admitted that they had no leads relating to the incident as they hadn’t been asked to perform at The Oscars since the 1980s. Also that The Police had been caught sleeping as they were now old men who nodded off easily, particularly after tantric sex.

As of today, reports suggest that Lady Gaga is still loose.

Do’s and Don’ts of Soldering