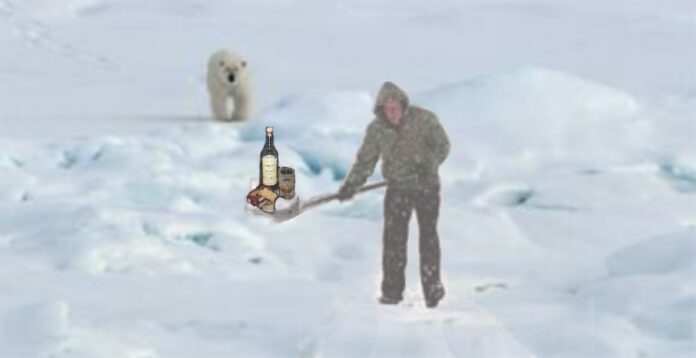 My folks have kept faith with the same New Year’s tradition for 50 years.
Come the last death throws of each year we would pretend that my hair was darker than it actually was and I would be bundled out the back door with a shovel.
With my protests about the New Year having started 8 hours earlier in Australia ignored, I would begrudgingly shuffle around to the front of the house at a pace calculate to minimize the time I would have to stand still during my chilly exile.

Upon the shovel would be a peculiar collection of small items.

A lump of coal ( not my present from Santa ). It kept company with a silver coin, a piece of wood, a pinch of salt, a newspaper clipping, a bit of bread and, possibly, a short cake cookie ( which we would refer to as a biscuit )
I am sure there was a time when I knew what these shovel dwellers represented. Now I am hazy .. but I like that. I think tradition that has developed a personal flourish, through rose tinted memories and a lack of motivation to engage in research, is kind of sweet. As long as its wholesome core is intact.
The eclectic collection central to this below room temperature is supposed to represent ushering in the New Year and the hopes we have for it.

represents a warm house, my folks say, and not that the electricity is about to be cut off.

The piece of wood

stands for construction, then ? Apparently not. This too my folks claim is to ensure a cozy crib for the coming year.

… We weren’t sure if that was another contributer to the now uncomfortably warm  home, whether it represented culture or was just something to read as you awaited trial for arson.

would embody a prosperous year to come … and its first temptation.

is there to ensure that the household does not want for sustenance that year.

too, although the addictive high sugar content of this item conjures whimsical suspicions that its addition may have been sponsor by ‘big business’. But, then again …. ‘shovel cookie’ … Ew!

My folks were shakier on this explanation. ” It’s to ward off evil spirits “, they claimed. “. ” So, it’s important to take this tradition with a pinch of salt ? “, I replied. This was met with pursed lips and a frown from my mother, as was my speculation that evil spirits maybe suffered from high blood pressure.

I was just funning, of course, but she did make me stand out in the cold each New Year Eve.

Funny Words That Start With Q

Life As A Toothbrush