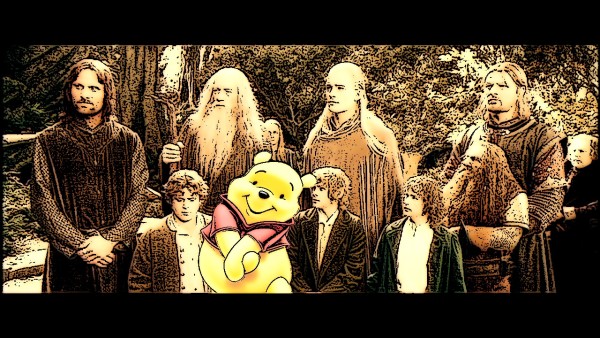 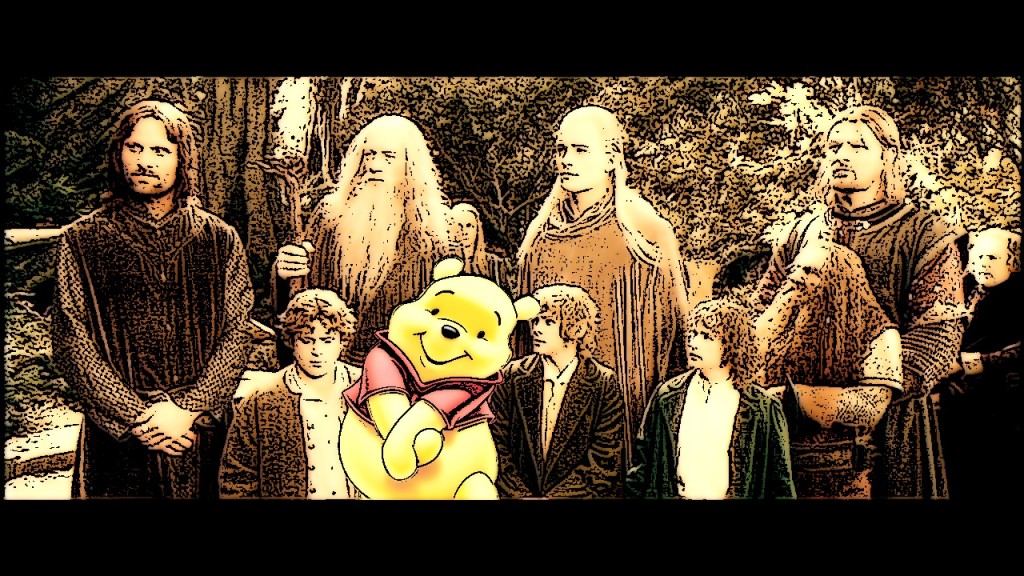 No doubt many of you out there in the media savvy Pickleverse will recognize the above a line attributed to Bilbo Baggins in Peter Jackson’s film Fellowship Of The Ring.
It is a quote that I found strangely memorable.  Not the first scene I enthused about when I left the cinema,
” Wow man ! How cool was the way Legless took down that Olliephant or cow or whatever it was ? “
– ” Yeah. That was pretty neat …. but do you remember that ‘ Simple Life ‘ line ? …. Awesome. “
” And Sean Bean’s character died again “
– ” Yup! … I think it has to be in his contract. ” ,
…… but, philosophically it struck a chord.
So with that in mind, a mind like a blancmange trap, 14 years later I found myself philosophizing, ” You know who else liked a simple life ? … Winnie The Pooh, that’s who.
This, naturally, led me to ponder how Winnie The Pooh would have fared upon the epic quest to destroy the one ring had Frodo been washing his hair the evening Gandalf dropped by … & for the 6 months after that, I guess, since ( now that I think about it ) the schedule at the start of the quest was fairly relaxed.
But ” Why would Bilbo leave The One Ring to a small golden stuffed bear who, in all probability, he was not remotely related to? ” you ask.
I can give you two solid motives …
1 ) Frodo was also adopted, so why not Winnie The Pooh ? Who is to say that Bilbo Baggins was not Middle Earth’s answer to Madonna or Angelina Jolie ? How implausible is it that Bilbo would take Pooh into his home in an attempt to attract Brad Pitt ?
&
2 ) If the reason you give for missing your legal guardian’s one hundred and eleventieth birthday party, is ” I am washing my hair. ”  then you are going to get written out of the will.
” Go home Logic, you’ve been on the Butter Beer “
So, having established that Frodo is out of the picture, how would Lord Of The Rings have been different.
Firstly, The Ring ( or The Precious ) would presumably be an evil all powerful  pot of honey.
Gollum would also be a bear or possibly a Queen Bee, turned ‘fabulous’ by the corrupting honey.
Admiral Ackbar would have to make a cameo appearance so as not to miss out on the opportunity to say, ” It’s a honey trap “
Christopher Robin, being the wisest character, would probably be a 7 year old Gandalf.
Piglet would be Samwise and would be in love with Pooh … but nothing physical would ever happen. Dejected, Piglet will eventually settle for a tiny barmaid or an owl or something and settle down to a career as a watchmaker before been burned as a witch after rabbit started a rumor that one of Samwise’s pocket watches had been dancing naked in the moonlight with farmer Brandybutt’s prize cow.
Merry and Pippin would, I suppose, be Kanga and Roo .. which would lead to a very dubious relationship indeed, given the lack of pouches.
Tigger would be Aragorn which would bring a delightful chirpiness  to this dour role.
Then, unfortunately, we are out of cast members to make up The Fellowship …..  or are we ?
After seconds of exhaustive research of my imagination, I remembered the classic minor Winnie The Pooh characters
Mad Badger
Pirate Chicken
and
Trans-gender Butterfly
The Fellowship is complete.
The quest, of course, would be a delightful stroll through 100 Acre Wood culminating in a quaint English Tea at 4 pm during which The Honey would be taken away by a butler and discretely destroyed out of sight of sophisticated ladies or landed gentry who might faint at the horror of honest work being done. 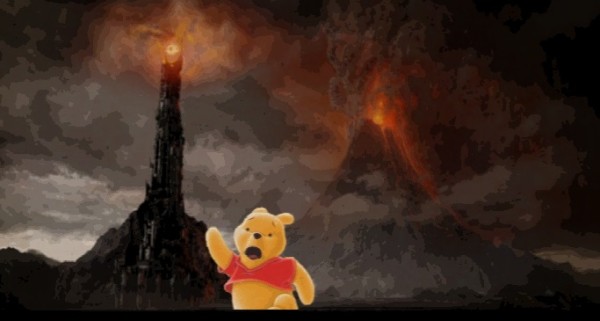 Alternatively, a giant eagle would just do everything, as per usual. Frankly, why the governments of the world are not replete with eagles is beyond me. Eagles get **** done.

What Weird Topping Do You Put On An Otherwise Normal Food?

What Heavy Object Would You Gladly Carry For A Mile?