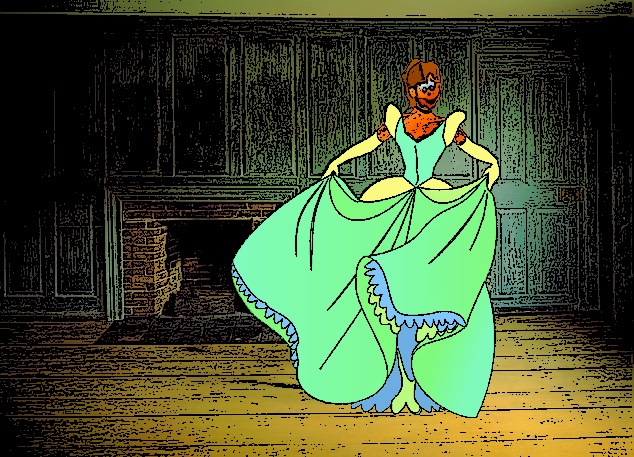 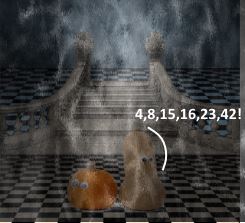 shouted one terrified guest from near the buffet table.
It was a disaster. Guests were bent double in violent fits of coughing, costumes and food was ruined and the orchestra now contained a woodwinded section.
The Prince was livid. You could practically see steam rising from his furious face … which only made visibility worse.
“You there! Cough for me, man!” barked The Prince.
The footman dutifully performed the coughing that etiquette deemed socially unacceptable for the royal classes while the footman in charge of ablutions performed his duties just in case The Prince was startled.

The Prince’s gaze turned to the grand marble fireplace …

There stood a beautiful you lady in the most spectacular unsullied dress. Beautiful but with an unusually vivid tan.
“Gadzooks!” thought Cinderella, as she looked at herself. “I’m a real boy … I mean girl.”
“Gadzooks!” gawked The Prince. ” What a waste!”
“Well, that’s a bit hurtful. This is a new dress”, replied the enchanting pumpkin squashed in the bewitchingly slim fitting ball gown.
“Pardon me my dear, I mean waist. … So petite”
“Oh my! Is that okay? I don’t eat much. Mainly a liquid diet as it happens. This is the first time I’ve had a waist, I used to be a pumpkin … farmer, you see” babbled a besotted Cinderella almost incriminating herself.
“A delicious pumpkin farmer” said The Prince, correcting the blushing squash.

coughed Buttlaxia in disbelief but also because she was already coughing. “You were supposed to marry one of my kind of beautiful daughters.

“Away with you, you unpleasant peasant. I do not want to wed either one of your mangy goats”, chided The Prince. “They weren’t even be beautiful when the room was engulfed in billowing soot. Plus, that one keeps nibbling at my ceremonial cape. No! I only have eyes for this stunning … creature before me. She shall be my bride.”

The lovestruck couple danced all night and no one else was allowed to leave or complain about being covered in soot because …
royalty, although there was some coughing from the footmen who were sweeping up.
“I am sorry about my royal staff” apologized The Prince.
“That’s okay”, replied Cinderella. “It isn’t poking me too much”.

Meanwhile ( but earlier ) …
Cinderella Pumpkin’s Fairy Godmother woke up with a start.

screamed the furry tongued gobmouther. “I didn’t explain how the magic worked”. She staggered to her feet and teleported to the palace … and then the correct palace to tell Cinderella that the spell would wear off at 12 midnight and she would be a pumpkin once again.

“Yeeea-h … Sorry about that” mumbled the embarrassed fey. Honestly, it wasn’t the Fairy Godmother’s finest hour … but there was a free bar, so the evening wasn’t a total loss.

The Prince, however, did not see a pumpkin before him for it was true love … and because he was a strange delusional kinky man with poor eyesight.

So The Prince and the pumpkin were married …. and the Kingdom went to hell because it was ruled by a vegetable and a delusional monarch with a pumpkin fetish … At least, the kingdom went to hell for three weeks until The King came back off of vacation and threw Cinderella on the compost heap because she was a mushy decomposing pumpkin.

Roosevelt Who? Or The Call From A Facebook ‘Friend’