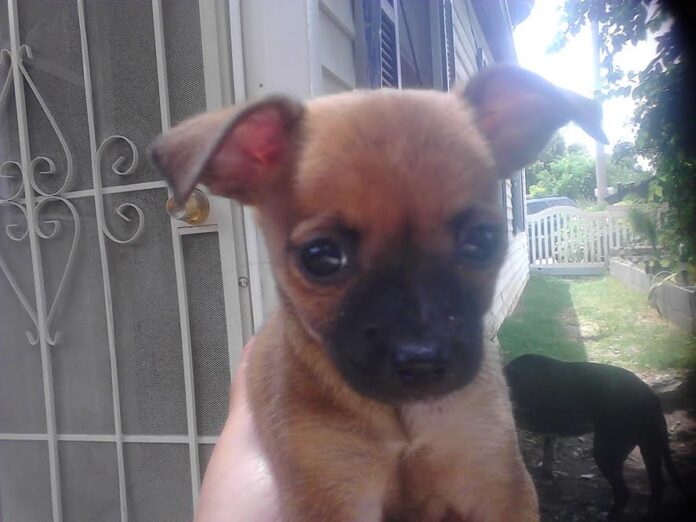 I have always kind of laughed at those individuals who treated their pets like little kids. You know the type of person I mean. The ones, mostly women, who take umpteen photos of their dogs and cats and share them on Facebook or show them around the office; those owners who go ga-ga over every little thing their pet does—from walking down the street to taking a poop. The owners who talk to their pets like they are little babies. You know the type I mean. I thought that they were, at best, strange, and, at worst, candidates for the funny farm. An old colleague of mine has recently got pitbull border collie mix puppies. I think she’s fostering them whilst they find forever homes and they made me view dogs in a whole different way. Seeing her post photos of them just made me realise that I needed one. A pit and collie mix require a lot of exercise and I was very nearly going to take a puppy and then I decided I’m not ready for a dog, until about a month ago when I became…a doggie daddy.

I named her, Cinnamon Anne Luz “Alligator Chihuahua” Cassity. She is a brown-haired(hence Cinnamon) Chihuahua with a black muzzle and light, almost blond hair, on both her eyelids(which gives her the illusion of wearing eye shadow makeup). She was teacup small on the Saturday morning she came into my life for the first time. Her middle name, Anne, is in honor of my late mother; Luz is to honor the Hispanic tradition of adding this honorific(Luz=Light) for the Blessed Virgin in the names of female children(a shout out to my adopted religion/cultural identity and to my late wife, Isabel). I informally added ‘Alligator Chihuahua’ because she has developed the habit of biting down on my nose to get my attention, especially first thing in the morning at 5 o’clock when she wants/has to go out and I want to stay asleep in bed).

Anyway, back to my main point. In the short time we have been together, I have become the person I used to secretly mock. I love sharing pictures of her on Facebook; I can talk endlessly about the daily growth I see in her; I love to talk about the huge spark of intelligence in her bright, little eyes; the highlights of my day are; waking up in the morning to see her cute little face in front of mine; watching her doing her little pee and poop outside at various times of the day; coming home from work, and, as I walk in the door, seeing her come running to me with her little eyes all aglow. And don’t get me started on the cute little lick-kisses she gives me when I pick her up.

Besides my roommate’s older female pit bull, the other dogs in the household are three chihuahua half-brothers(the B Brothers—Burrow, Bob, and Brodie). Burrow just turned one, and his half-brothers are both about six months old. They are very active and competitive. I love and am so proud that Cinnamon, who is about eight weeks old, give or take, has the talent and self-confidence to give as good or better than she gets in the almost continuous(except for several daily dog naps) tousling among the four of them. Missy the pit bull is too lady-like to partake in the activities except on rare occasions.

My roommate says that I have not appeared more happy in my time here in Sacramento as since Cinnamon has come into my life. I realized she is right about that. Cinnamon, Cinna-bun, Little Mama, Mamacita has been good for me. There is something liberating and therapeutic and joyous about having a ‘dog’hter—about being a doggie daddy!

Two Marines And An Army Soldier Boarded The Same Flight…