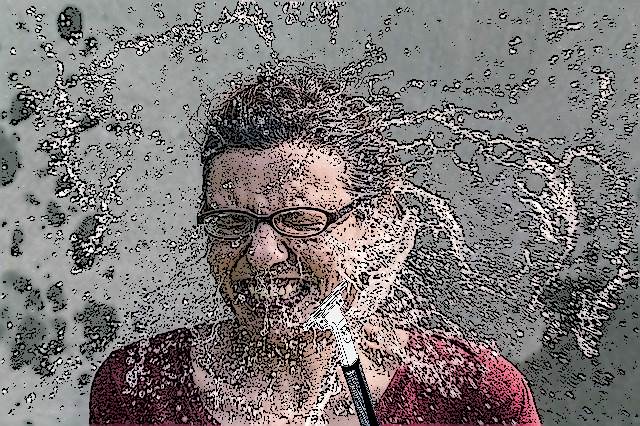 The setting is a launderette. An attractive young lady sitting on top of the driers. No surprise there. Never an older lady, whom might have more cause … er … to wash stuff … .Cats,.probably.  But I guess I can let that go.  I mean it would be difficult for her to get up that high in the first place … And, what if she had a fall ? Would that be my fault ?
I wish the advert was different … but I don’t want that difference to be an old lady falling 10 ft off an industrial sized drying unit on to the linoleum with a terrible 70s design ( flared ). Then scrabbles weakly to turn the camera ( which has also fallen over … C’mon! Obviously she’s shooting the ad herself on a hand held camera … She’s an old lady. How much money do you think she’s got ? … She’s at the launderette for goodness sake. ) back upon herself and berates me as she bleeds out. 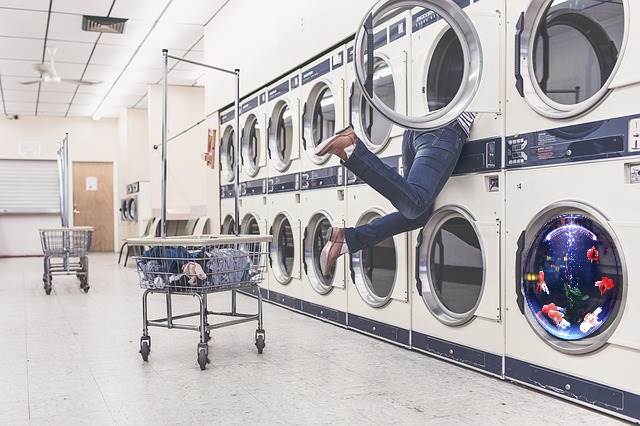 ” Are you happy now ? … Are you happy **** *********, with what your deranged crusade for fictional age equality in toiletry commercials has wrought ??  My hip is broken …  I’m bleeding all over my clothes … Do you know how difficult that is to get out ? …. I’d just washed them too …. That’s $5 straight down the drain for nothing  … Thanks a lot you jerk … I mean, $5 isn’t bad .. It’s a great little place this actually … but, basically, I’m still a bit p*ssed off … Gerald is going to put me in a home fore sure now.”
And you know that she’s in the launderette all by herself, right ? … ’cause otherwise someone would be holding the camera.
Then the ad ends, nothing has been said about the razors she was supposed to promote, I know that her fee won’t be paid, so Gerald ( the cheapskate ) buries her in an orange juice cartoon in the back yard, I grow an absurdly long crazy wild beard ’cause I am too wracked with guilt to ever buy a razor again and pigeons nest in my beard.
I don’t want pigeons nesting in my beard. THEY’RE A LEDGE BIRD …… A ledge bird.
Anyway ….. I digress.
Okay,
The young lady ( who isn’t an old woman ) perched upon the drier, selects a freshly washed dried & folded ‘ lady item’, scrunches it up and playfully launches it at the hunky gent loading / unloading ( he doesn’t know, he wasn’t booked to explain A Brief History Of Time in 15 seconds ) the adjoining drier.
As the he looks up ( ignoring the old lady presumably still bleeding out next to him. He just wanted her drier … Jerk! ) the … ‘lady item ‘ ( possibly, but not necessarily, a slip ) explodes into a shower water accompanied  by ” It’s like a blast of hydration ” as narrated by the king of science himself, Mr. Science.
Firstly ….. ” Whaaaaaaaaaaaaa -t ???? “
And secondly, … I thought, ‘ Blast Of Hydration ‘ was a Poke’mon attack …. which presumably means that the young lady has a very small house. … Not wonder she is hitting on the guy, he lives in a drier now … or will do as soon as the old lady pops off.
Further confusion arises at this point, as on screen is a little disclaimer stating ” Hydrates only during shaving “, so really, as the guy is in a launderette & also not shaving ( shaving only being possible in a designated Poke’mon Battle Arena ) , the ‘lady item ‘ should not bursting with anything.
I don’t really get the analogy either. Why would clothes burst into water upon leaving the possession of the the lady ?
Could the lady be the little mermaid ? Are these be special clothes made entirely of water ? Does she need them to survive ? Is this a cry for help ?
Why is the little mermaid so sad ?

Alternatively, if the lady is not a mermaid, haven’t her ‘ lady items ‘ just come out of the drier ? Surely they are the last things that could be comprised completely of water. …. I wonder if there is another Transformers movie in the pipeline ?