Home Nonsense Funny Articles The Day That Made Me Ceiling Cat 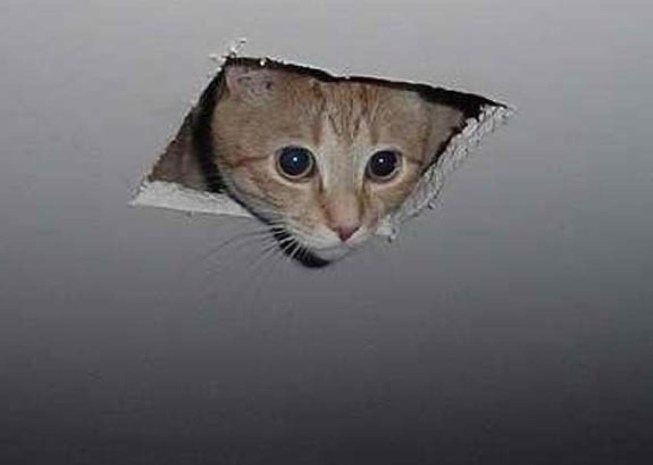 Hello. I am Ceiling Cat. That’s my picture up there, the one that made me famous. Due to that incident, I have been the face of memes and the talk of cat nation. Prior to that day, I had an interesting life, especially considering that I am still on my first one. I began as an aware kitten; always learning but aware.

I would often spend my day chasing a mysterious light that would flash red into my humans’ kitchen wall and then disappear. The tiny humans would laugh, and the larger ones would pick me up too often. Since then, however, I have grown significantly in size and wisdom. Because I began constantly outsmarting the humans, they seem to leave me alone more often. Well, at least until the day I became Ceiling Cat.

It all began on my 432nd day with my humans. The day for me started out pretty normal. I arose from my second nap of the day, between my third and fourth sleep session. Upon awaking, I did what I normally do at that time … nothing. Nothing at all. A few minutes of nothing passed, and I ordered my long-haired human to pet behind my ears. After jumping on the couch and yelling for a bit, the human conceded and did as I required. I then moved on to manipulate the tiny humans into feeding me.

This was done, as usual, by simply pushing the tiny humans’ feet and screaming. They quickly conceded defeat. Once my meal was complete, I had my fourth sleep session. When I awoke, it appeared to be dark in my kingdom. This usually signals that the humans are resting to care for me again in the light. However, on this day, I heard a noise coming from the room where I let the larger humans sleep. I know of the old ancestral saying that curiosity killed the cat. It’s true, but I just couldn’t take the noise anymore.

There is an area of my kingdom that is higher up, and it leads to a hole that I would jump through to get into the resting place of the larger humans. So I ran to the area, squeezed through, and peeped my head through the hole. The humans were performing this odd ritual that they did every now and then. I commanded them to stop. After several demands, they spotted me and laughed.

I ensured them that this was no laughing matter. The more I yelled, the more they laughed, until the hairy taller human clapped at me in displeasure. I was furious at his impudence. I left to return to my final sleep session until the day returned. Since then, I have seen my face everywhere on the box my humans use everyday. They call it “memes.” I call it true fame and adoration.

Since then, I have been known as Ceiling Cat. I appreciate their reverence of me, but I truly believe humans are idiots.

How Did You And Your Significant Other Meet?

Which Extinct Animal Would You Bring Back To Life?