Home Nonsense Funny Articles Battle At The Old Oak Tree: An Armadillo, A Porcupine & A... 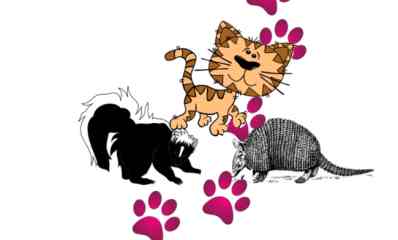 Pee Wee was a grumpy cat.

Not like those grumpy cats you see on Pinterest and Facebook with their smashed Persian noses and photoshopped expressions. No, Pee Wee was more of a natural grumpy cat like the original, Tardar Sauce, whose facial features were morphed by dwarfism. She’s a media sensation. Pee Wee was just a grumpy cat. His permanent frown and squinty eyes reflected a cat attitude on steroids. That expression belied his otherwise amusing Sylvester the puddy tat appearance.

was on what was left of a tree house built by the grandfather of Rusty, the current ranch owner. Pee Wee owned Rusty and his wife when it suited him. The ancient live oak tree stood proudly on the hill several hundred yards from the ranch house. On that tree house platform Pee Wee kept a collection of items. One never knew when one might need to drop something on someone’s head. That opportunity was presenting itself, as a scuffle ensued at the very wide base of the tree.

down at two armored warriors facing off near a very attractive den. A foot wide opening obviously led to a cozy home under a large tree root. Army, the armadillo and Porky, the porcupine, both desired the den for their own. Army lunged at Porky but only received the south bound end of a north bound porcupine in his face. The tail full of quills barely missed the armadillo’s nose. Suddenly something fell from above onto Porky. A ball point pen lodged between two quills while the pen’s clip hooked another. Porky shook, but could not dislodge the intruder. Then a rock fell, landing smack on Army’s forehead.

The armadillo hopped once

and charged at Porky. More items fell from above. Rocks, twigs, and even a toy truck rained on the pair. The Tonka toy smacked Porky in the nose. Furious, he charged at Army. Pee Wee blinked once and turned his face into the wind. His grumpy face seemed to smile. Below, four sets of black eyes appeared in the mouth of the den. Porky noticed the movement, but Army, with his terrible eyesight and snoot full of mud did not. But he did notice the porcupine was no longer attacking and had turned away. He hopped up and down in victory. Then another rock hit him from above. He turned around in a circle before focusing on what had grabbed Porky’s attention.

A skunk on the warpath emerged from the bushes.

The mother ambled straight for the den and her babies with tail raised threateningly in the air. Porky hurried away while Army did his little hop and took off like a shot in the opposite direction. The mama skunk scowled at the cat looking down at her and herded her family inside. From his perch far above, Pee Wee sneezed once and looked smug.

Don’t fight over something you don’t know much about until you’ve sniffed out all the details.

Bananas Are Dying Out! What Will We Eat Instead?

Ginger Cat vs. The Paper Army