Home Nonsense Funny Articles A Bunch Of Monkeys Go To A Rave. Who Has The Glow... 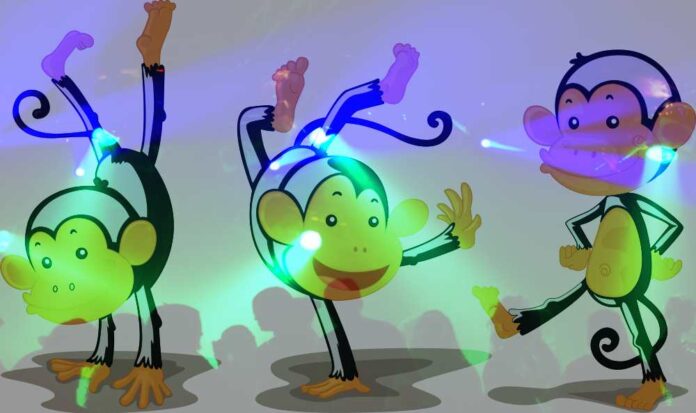 While monkeys have loved all types of music for decades, there has been a real spike in the popularity of electronic music amongst the primate community. While we’re not entirely sure what this love of electronica genres is due to, the best guess of resident music critics who focus on studying the listening habits of things like monkeys, rainbows, squirrel ninjas and unicorns is that the oomp, oomp, oomp beat of most dance songs just seems to move their souls. Monkeys—like humans—get hooked on that type of music.

So because of the rise in popularity of electronica, there’s been a ton of monkeys going to raves in recent years, selling them out, dancing on all fours all night long. Called by many of our resident monkey music critics as one of the wilder and weirder events you’ll ever experience, this market has become quite lucrative for concert promoters, electronica music artists and all the other vendors who use these shows to make a few extra bananas off selling to this new market of fans.

Which raises the obvious question if you’re ever going to attend a rave these days, which will undoubtedly have a strong contingent of monkeys in the audience: who has the glow sticks? These long sticks of light make any monkey rave more colorful and enjoyable. They can be spun, wrapped as bracelets around arks and necks and thrown around the crowd. All you have to do is find them in a sea of excited, dancing monkeys. Below are the top 3 ways to make sure you find those fun sticks of light to make your monkey rave experience at least somewhat familiar:

Just because all the other monkeys love electronica music, means there are a few monkeys who have been going to raves for years, before all the other monkeys caught on. This tends to happen with humans as well—a few people sniff out what is going to be cool years before it actually becomes cool and help keep the movement going. They are better known as trend setters. These trend setters would have been doing things that no one else was doing yet, giving them an arsenal of experience in the rave setting… meaning they may have a backpack full of glow sticks, because they know how much more fun that makes a rave. So look for those monkeys who know how to dance and have back packs.

2. The Monkeys hanging by their Tales

Monkeys have the unique ability to hang by their tales from things, meaning they can use hands and legs to move glow sticks to the beat of the music. So any monkeys who are hanging in any way are probably a pretty good place to start looking for glow sticks, because if they are not eating bananas while they hang, they’re going to need something to do.

Sometimes, at monkey raves, there is a glow stick vendor. This guy is often over run within the first few minutes because of how much monkeys love glowsticks, leading to him making a lot of cash and dropping his supply of glowsticks on the ground for all the monkeys to pick up. However, if you get to the rave early before it starts, you will probably catch the glowstick vendor preparing to start selling his wares. If you do, make sure to buy as many glow sticks as possible—then you can make some extra bananas off the glow sticks yourself, by selling them to dancing monkeys during the rave. — Glow Wands and Swords as low as $1.15!!

What Was Your Best Experience At A Psychic?