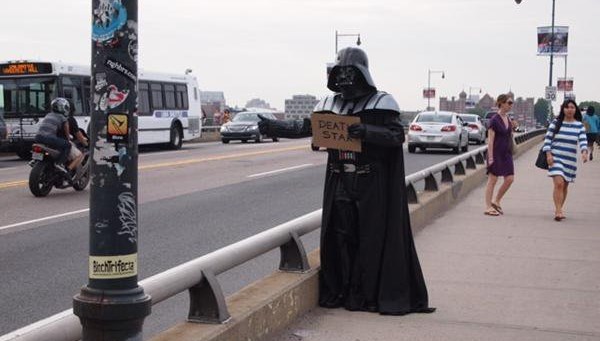 Who is Depressed Darth? an incredibly hilarious spin on Darth Vader from Star Wars.. but hopefully we don’t have to elaborate.

From a long time ago, in a galaxy far, far away. Not associated with Disney.

It’s no secret I used to run shit.  Now, on the other hand, things are not so Fresh Prince of Bel-Air around here.  Broke?  Check!  Single?  Check!  Homeless?  Check!  Still awesome?  Maybe?  Bottom line is life isn’t what it used to be.  Personally I blame Frank Stalone, but that’s neither here nor there.  Still a huge dark-side advocate despite where I am now, so please keep the “I told you so’s” to a bare minimum.  I’m here to party.

What do the Jedi and the people from Alderaan have in common? They're all dead

Life would be better if the Imperial March played everywhere you went.

HOW2: How to Be a Rapper! Annoying Orange

What Sci-Fi Gadget Should We Already Have By Now?

Margaret – Thank You Very Much