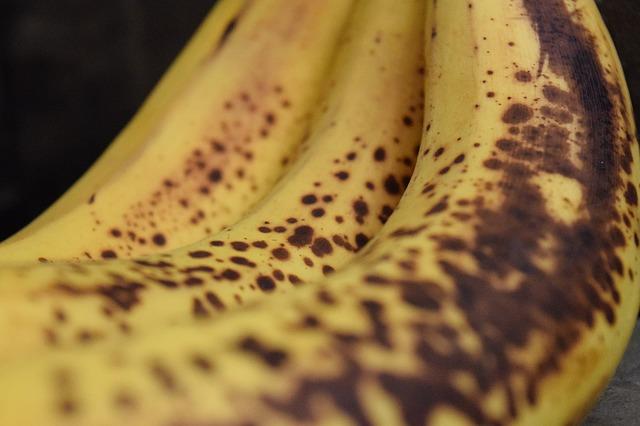 There has been an ongoing debate about reviving black, dead bananas, often referred to as zombie bananas. Some believe that zombie bananas can be brought back to life by sealing them in a plastic bag with dry rice for one hour and then slowly heating them with a blow dryer. Others don’t put any stock in the banana resurrection. A better question is whether zombie bananas should be revived at all. Just look at what happened to Nana Peel.

One evening, Nana was preparing for her six grandchildren to visit the next day. As she was looking through her cupboards for a breakfast plan, she came across a bunch of forgotten bananas. They were black and sickly looking. Nana’s bridge partner (they played bridge together every Saturday at the community center) had been telling her about rejuvenating blackened bananas. Nana decided to give it a try and went to work reviving them.

She was quite pleased with the results and set about making plates for the children’s breakfast. She put one banana on each plate and figured she could easily add a homemade sweet roll in the morning. There was one zombie banana left, and she was curious to see how it tasted. Nana giggled as she made herself a “zombie split.” The taste was just a touch off, but not bad for a banana near the end of its life. Tired after a long day, she left the banana peel on the counter and headed upstairs to enjoy her treat while she watched the news before bed.

She settled in, her room lit only by the white-blue flicker of her TV. The long day, satisfying snack, and the monotonous voice of the news anchor lulled Nana right to sleep. A loud crash jolted her awake. As she got her bearings, she realized other noises were coming from downstairs. She crept toward the landing and peered over the railing into the kitchen. Nana could not believe her eyes.

Zombie bananas peels were destroying her kitchen! The peel from the banana she ate was freeing the last banana from its mushy innards to join the fray. By the sink, two peels were fighting with steak knives, stabbing and slashing at each other. Two peels were doing a bizarre sort of flying trapeze act from the chandelier. Another was slinking its way across the counter, pushing off the breakfast plates Nana had set out.

Two zombie peels moved toward Nana’s most precious family heirloom, an antique cookie jar. Snapping into action, she raced down the stairs yelling, “Don’t you dare!” As she ran into the kitchen, one zombie peel slipped itself under her foot, causing her to slip and fall. Her head glanced off the kitchen cabinet and everything went dark.

Nana woke to the sound of her grandkids eagerly pounding on the front door. The kitchen was dim with morning sunlight. It looked like a tornado hit, but all was quiet. The zombie bananas and peels were gone. The only evidence they had been there was the mess left behind.

No one ever believed Nana’s account of that night. Everyone thought it was a tall tale from a night of too many margaritas. Keep this story in mind when you find your own blackened bananas. You may not want to mess with these zombies.