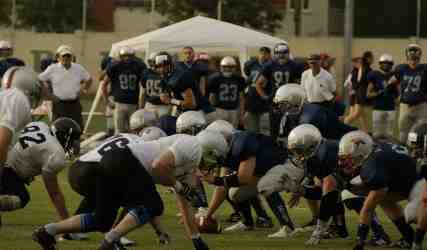 All rights reserved for a one man band

Football reigns supreme in Texas. Not only do we play Pop Warner football starting at age six, we play regular 11 man football in junior high, high school, and college. Texas A&M proudly sports the 12th man team. And if you only have nine boys in your high school, you can still play football…six man football.

But if you happen to be an eight year old little boy with senior citizens for parents, living in a mostly retired community with no children, and you have an older sister who has just been given her own phone with unlimited text, you learn to play one man football.

How does he do that?

The question deserves an answer and here it is.

I video taped him playing one man football the other evening. First he is the center, calling the signals and hiking the ball high in the air. Then he turns and runs to catch the ball as the quarterback.

I think there was a blitz on that time because he stuck his right arm far out to the right, pivoted, and quickly switched the ball to his left hand. He was now the running back.

He did a quick reversal and spiraled the ball high and long downfield just to the side of the sand pile giving himself enough time to become the wide end receiver and score the touchdown.

But the most ingenious play

was the kick for extra points. He threw the ball up in the air, caught it, placed it on the ground and held it with one finger, then spun around and picked it up and kicked it for the field goal. Sometimes he made the extra point and sometimes he didn’t. He explained for the benefit of his single fan.

“I have to read the other team and decide if I want to go for two points or try for the field goal. I’m the quarterback so I can do that.”

And with that he ran back to huddle up with his “teammates” before the next play. On the snap he ran wide to the left, then suddenly threw himself onto the sandpile.

“What happened?” I asked, fearing he had hurt himself.
“Got tackled.”

He played like that for quite awhile and then he stopped.

When he came back he said “Can I see the instant replay of that last touchdown?”

“Sure,” and I clicked the correct button on the i-pad and played it for him.

I could not help but admire his creativity and spirit. He was making the most of his situation and creating a fun filled evening for both of us.

There’s a lesson in there somewhere.

For my husband, I think he was just glad the boy left the cheerleaders on the sidelines.

Ignorance (And An Hour At The Nail Salon)

Do’s and Don’ts of Underarm Waxing