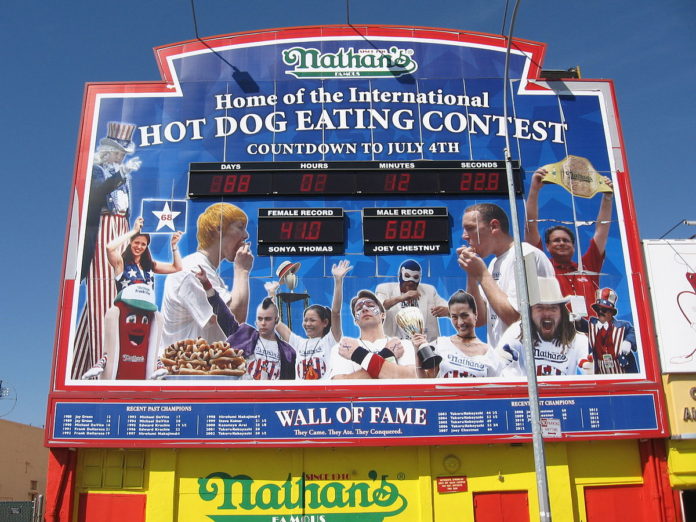 Every year, thousands of people go to Coney Island in New York City to watch the weird and wacky sport of competitive hot dog eating at Nathan’s Famous Fourth of July International Hot Dog-Eating Contest. We’re talking upwards of 30,000+ people, all clamoring to be a part of the annual festivities, watching people chew, gulp, and try not to heave to win the eating contest and be crowned… King of the Weiner? Meat Champion? One thing’s for sure: these competitors are going to eat to win.

Out of the many competitors, a teensy woman from New Jersey has proven to be a force to be reckoned with. Dr. Rene Rovtar, a seemingly mild-mannered superintendent of schools, has procured a spot among other heavy-hitting competitive eaters at the Circle K Speed Street qualifier, which was held in May in Charlotte, NC.

Here she is interviewed before the qualifier by Major League Eating, the governing body of Nathan’s Famous Hot Dog Eating Circuit:

Rene finished 10 dogs and 10 buns in the qualifier, not too shabby for someone with such a small frame, but nowhere near the heaviest hitters in the hot dog eating competition.

Last year, the reigning champ, Joey Chestnut, finished 70 dogs and 70 buns in 10 minutes to not only clinch the contest, but set a new July 4th world record! His first win was in 2007, and has won every year except for one since then.

Here is more of his story and rise to meat victory:

The fierce competition heats up with 18 women and 18 men, eating hot dogs and buns in whatever way gets them down most efficiently. For Dr. Rene, her tactic involves breaking the dog in half before eating, then saturating the bun in strawberry lemonade to make sure she’s consuming at top speed.

Other popular secrets of competitive eaters:

The 2017 Nathan’s Famous Fourth of July International Hot Dog-Eating Contest is held at the corner of Surf and Stillwell in Coney Island on July 4th. Watch the following competitors battle it out this year!

Have You Ever Been In A Competitive Eating Competition? Tell Us Below!

What Are Some Good Household Uses For Vodka?

A Blonde Calls Her Boyfriend And Says…