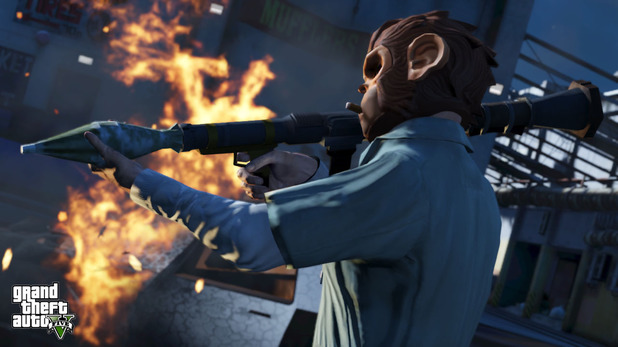 The hearts of parents across America froze …

this week, as the release of GTA V heralded another year their children would not find love, since leaving home as young adults.
But like many fears about ‘the biggest game of the year’ this too proved unfounded, as James Acosta from Yarnsville Park, Minnesota announced his total engagement just one day after purchasing Rockstar’s masterpiece.
James was unavailable for comment, being on honeymoon, in the living room of his uptown studio apartment, but his proud parents were more than happy to talk to Monkey Pickles.

joked Mr. Acosta, 53 ” but beautiful in its own way.  As parents, you just want your kids to be happy and there is no doubt in my mind that all James’s dreams have come true. You can see a glow in his eyes … although that may be from the TV screen ”

We asked Mrs. Acosta, 48, if she was concerned that James would be influenced by video game violence.
” Not in the slightest. James has been playing the GTA series for years. He is the sweetest, most social boy you could hope to meet. GiTA is hilarious. I don’t know how anyone can mistake her humor for anything but parody. “
The Acosta’s did admit that they were not expecting grandchildren any time soon but were sure when the time was right, it would not lead to a Matrix style apocalypse.

CEO, Oz. Burnt-Lunch, said …”James is a key player in my company and when I saw how happy James was I gave him the time off in a heartbeat. A happy workforce is a productive workforce.” Mr. Burnt-Lunch continued, “People underestimate the healthy business experience you can derive from GTA. I hired James on the strength of the management strategies and deas he developed while playing the GTA series. There is a lot of planning and delegation involved. Now that GTA V allows you to buy property that generates real ‘in-game’ income, I expect James’s business acumen to jump to a whole new level when he returns from his romantic break. I only see GTA V being good for America’s economy and businesses. I just hope I can hold on to James. ”

It is hard to argue the case against, when first day sales gross a reputed $800 million. It is the sort of gross we would like to see each day at Monkey Pickles instead of what we usually see at lunchtime.
As yet the boss hasn’t approved my request for a 42 hour lunch break to really get into the game but I can tell from early forays just how good it is going to be.
Amazing visuals, colossal game play area with surprises or secrets in every nook & cranny, the massive GTA Radio experience, exciting story arcs  …. I could go on.
You can  switch between 3 lead characters too … And it works! You’d think it wouldn’t but it actually allows you to tailor the game more to your style. Don’t like Michael’s style, then why not check out what crazy Trevor is flying ?
Or if you want to idle time away racing jet skis, playing golf or tennis, you can … and they’re pretty good too.
I haven’t been abducted yet but there are credible rumors that something strange is going on in the hills of Los Santos. Monkey Pickles can neither confirm nor deny whether aliens, Bigfoot or indeed the Monkey Pickles Mascot himself are responsible for these shenanigans. You will have to follow the trails of free t-shirts & ham sandwiches, if you can find them, to solve that mystery.
But there’s more …  The online multi-player experience has yet to be unleashed.
And, then we can eagerly await the ever inventive patches
Anyone up for Gorilla Theft Auto ?