Home Nonsense Funny Articles How Strong Is A Gorilla? 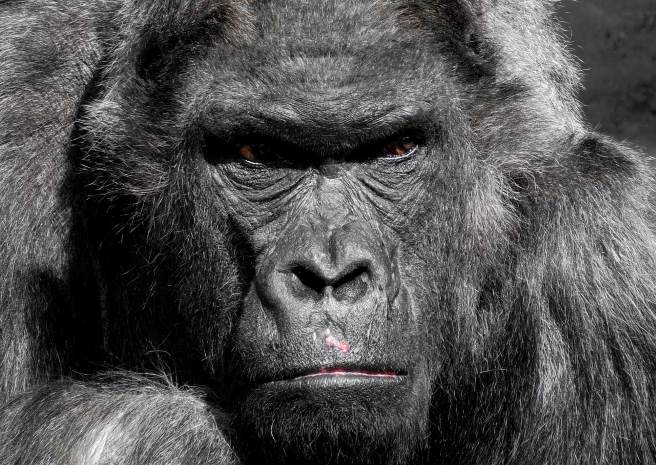 After decades of research conducted in the deserts of southern California, researchers have determined the exact physical abilities of the gorilla. Their determinations are taking the scientific community by storm. The results are being shared in as many as four houses in the town of Mishapatten, Vermont.

It was observed that when seeking food, a 400-pound silverback male was able to find their snack by muscling small twigs several inches to the side. Their muscular structure is such that they are capable of achieving this feat several times over the duration of their feeding. Dr. William Smeaton of the University of Utterly Useful Statistics noted that this movement could be compared to the arrangement of Cheerios on a dining table by an 8-month old human. Truly remarkable.

In the unexplored jungles of the Congo, mice often compete with gorillas for the same food source. This can create a great deal of tension within the gorilla tribe. The bright-eyed brown mouse has been known to squeak quite loudly when the leaves they are hiding under get dusted aside by a female attempting to scrounge lunch for her children. The gorilla’s roar can be heard across valleys when agitated.

However, it is their 5 feet in height that is used to confront their most feared enemy and overcome mice that usually stand several inches tall. The battles are fearsome to witness, and Dr. Smeaton recommends leaving the vicinity when a mouse pounces altogether. A female gorilla was seen to be sucking her finger after receiving a wound from one of the little squeaking horrors.

Ants can be found in every corner of the world, save Antarctica. They are often found underfoot, underground and under gorillas. The six-legged wonders build vast communities through teamwork and a remarkable body-to-mass lifting strength. If humans were ants, we’d be able to move cars like they were ping-pong balls.

Thus, when gorillas are seen picking through the fur of their offspring and they find a tiny ant, the amount of strength used by the gorilla to squash the miniature weightlifter is truly remarkable. Gorillas have been seen ripping apart ant mounds and spending an entire day eating and destroying the mud village. The energy expended in this endeavor is immeasurable and thus even more astounding in its longevity. This bears repeating. Ants. They can squish ants!

The yellow fruit known as the most slippery substance on the planet appears to pose no problem to the hulking silverback gorilla. Its pulp, prized by humans at breakfast all across the world, is locked inside a smooth, impenetrable rind. While centuries have been devoted to prizing the delicious treat from its protective coating, no sure-fire method has ever been invented by humans. Gorillas, with their unbelievable strength, simply peel away the steely exterior and eat bananas like there’s no tomorrow. Absolutely incredible.

A Tribute To National Donut Day

How to Make Cement