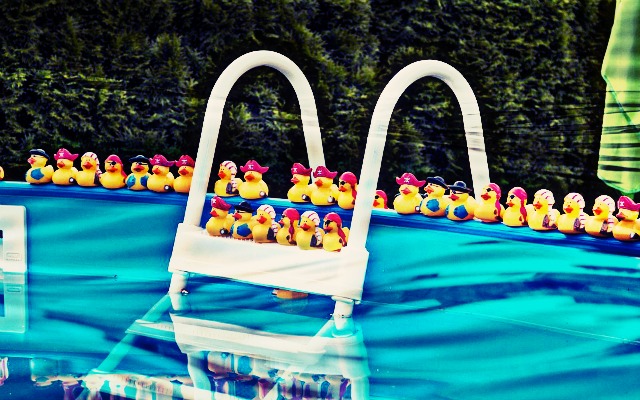 Every person who has ever attended and paid a little bit of attention to their science class in school must have heard the name of chlorine. It is the third most commonly spoken about chemical after oxygen and ammonia in our science labs and was situated at the top right side on the periodic table. It is represented by the symbol “Cl” and whoever tasted it, said it is salty. Have you ever given a thought as to what will you do if you have some spare chlorine just sitting in a bottle with you? Well, there are many ways you can put that chlorine to a good use.*

*Don’t really do any of these things. SATIRE, friends!

Suppose you are stuck in a desert far from the utilities and facilities of modern times. And after walking for miles under hot sun, you finally come across a source of water which you are half sure with your remaining working senses that it is not a mirage. You dive in it to cool yourself down. After calming your body, now you want to drink it to quench your thirst. But, what if the water you are about to drink is not fit for drinking. What if after drinking the water, you catch some illness and die shortly. You need to act fast as you are already 5 minutes away from death because of thirst and dehydration. Just put out the chlorine pills from your bag, fill the water in a container and put the pills in it. The water will become pure(ish) after some time and you can drink it then. Chlorine is a proven water purifier and is used for purifying water for a long time.

Some guests have arrived at your home unexpectedly and you are cooking dinner for them now. But you realize that you are out of salt in your kitchen. Now, you can’t just leave your esteemed guests to themselves and go out to buy salt now. But what you can do is using chlorine in your food as an alternative. Chlorine is claimed to be salty and is also the reason while the water containing too much chlorine tastes salty. I know, I know! Chlorine is poisonous. But, desperate times, desperate measures! Plus, it will be a good thing if you hate the guests who have come to your house.

If you are also one of the people constantly infuriated because of the rats treating your house as theirs, well rejoice! There is a great way to exact your revenge from those rodents and get rid of them at the same time; and that is by treating them with their last supper. Chlorine is highly poisonous and eating it forms other than chlorides means a sure death. So, take a cheese, apply or mix it with some chlorine, keep it anywhere and leave the rest to Mother Nature. The rat will smell the cheese and find it himself. And as soon as he takes the first bite out of the cheese, you will get your revenge of all the things bitten and trashed by it in your house. Not everyone would have the heart to do this, but there is always the more humane option of hiring a professional team like Rat control Melbourne FL to remove rats from your home instead. They’re dedicated to minimising animal/human conflict.

As A Fire Extinguisher

You can use common salt which contains chlorine in chloride form to put out fire caused by oil or grease. Now, you know you can’t use water to extinguish such fires as it is just ineffective with oil being lighter and floating above water. So, in case any of your science experiment involving oil and grease gone wrong and no other effective options available, just sprinkle salt or chlorine powder (if it exists) on the fire and the fire will be extinguished shortly. A better way is to keep a fire extinguisher ready next time you are performing any DIY science experiments in your garage.

How To Play Five Card Stud

What’s The Best Way To Read A Book?