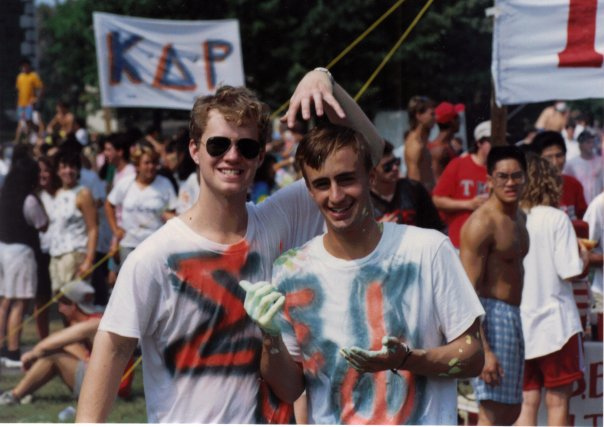 Rush week is a fast and spurious time when young, not so eligible men will be charging into fraternity after fraternity, desperate as a horde of squiggling spermatozoa to get accepted into the fraternity of their choice. It’s supposed to be a fun, crazy, memorable, challenging, and deadly competition to get in good with a winning group of testosterone fueled alpha males.

Here are some very important do’s and don’ts to keep in mind when rushing a fraternity.

Get this through your brain pan, freshman- you’re about to shove your head into a den of vipers where it most certainly does not belong in the far off hope of becoming one of them. You really should be ashamed of yourself, and you should definitely be afraid. Forget keeping your head down and flying under the radar, these bloody-minded muscle heads are going to seek out every drop of fresh blood they can find and slap it into a grease puddle on the grass in the quad, twice daily. That means you. And there’s only one way to get through it with a modicum of your humanity left intact- complete and total drunken obliteration. Think of it as a necessary general anesthetic, a fermented liquid painkiller that will help you to miss as much of the horror and pain as possible. We recommend you get started now.

At this point, there’s only one question left to ask: is your liver on your side, or theirs?

They may look like lemmings with taped glasses and a chronic case of virginity- and they are. But never let it stray from your mind that those nerds know things about your anatomy, psychology, about radiological technology and the criminal legal system that would enable them to frame you for murder, brake your collar bones with a ruler, and irradiate your pineal gland from thirty yards behind a brick wall. If I’ve seen it once, I’ve seen it a thousand times. Some muscled punk stumbles out of a kegger, spots the first ranking geek he can find and begins apoplectically screaming ‘NERDS!’ like the meat-head from Revenge of the Nerds. Then he gets all the attention he can muster from the other meat-heads and picks a fight with the nerd. The next thing you know, he’s severely laser burned on the soles of his feet, a helicopter falls on his head and Rolling Stone Magazine shows up to report on his complicity in a fake drug case.

Don’t be that meat-head.

We’ve already established that you’re headed into a locker-stink filled death jungle populated by adrenochrome hungry jocks, journeyman level sociopaths, and litigious commissars looking to drag you in front of a Canadian Human Rights Tribunal who will try and convict you just for peeing while standing up. Maybe I didn’t mention the litigious commissars before, but believe me- brother- they’re waiting for you. If you think for a minute that you’re going to be able to get by while remaining defenseless in broad daylight, you’re wrong.

It’s time to learn to sleep while clinging to a shadow shrouded portion of the ceiling, kill 50 ways from a fetal position, and take your food via dermal absorption. Your fat pizza-gripping hands must be honed into deadly weapons, and your feet must become very sneaky… um weapons.

Subscribe to Kung Fu theater now. They have a special on this month.

DON’T Not Do Abstaining from Doing Not Doing Drugs

Listen, kid. We’re not saying don’t do not doing drugs. What we are saying is if you do use drugs, just make sure you don’t. Because doing drugs is everything they tell you it is. Just think back on what your parents told you about the dangers of illicit controlled substances when you were four and you weren’t listening because you were trying to watch Inspector Gadget reruns. Then forget what they said and try to reformulate it in your imagination. Then scale it back a bit, reverse the final message and reinterpret it in the light of a Marxist, Intersectional Calvinist lens. Then reevaluate it according to the works of John Stewart Mill. Having done this, you’ll see that your brain on drugs is like an egg in a frying pan- and eggs are not just for breakfast anymore.

Good luck out there, freshman- and in the words of field commanders at atomic test sites in the 1950s, “Keep your hat on soldier, you’re going to be A-Okay!”