Home Nonsense Funny Articles Candidates Refuse To Say Please Or Thank You In Most Vicious UK... 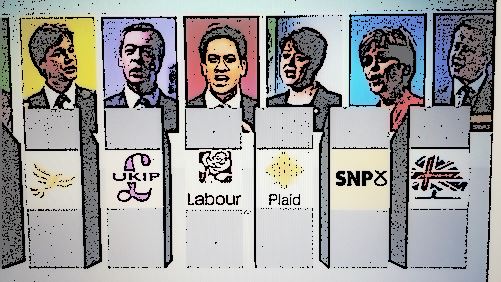 Yes! Election Fever is limply pawing at the United Kingdom this month as the big day when we choose which largely interchangeable rosette wearing lump of meat will next run our country …. into the ground.
This is not, of course, the adrenalin soaked excitement of hot blooded anticipation but the fever that leaves you feeling awful and not wanting to do anything.
BUT … we must vote … because society cannot be built solely by watching Netflicks and deigning not to throw popcorn at the cat.
So, here is a little help in choosing which political colors to nail to your flagpole ( < not an anatomical reference ) in the forlorn pastel re-imagining of Reservoir Dolts

Plaid Cymru : The Party of Wales. – Led by Leanne Wood. – Colors & Logo: Yellow Daffodil.
Based in the sea and lead by Leanne Wood, the most handsomest druid in Wales, unpronounceable Plaid Cymru is represented by plaid and tweed wearing ocean dwelling mammals. Prominent policies include fierce opposition against any plans for relocating The UK off the coast of Japan and the magical restocking of refrigerated vegetable drawers with leeks, an election promise that other less druidic parties just cannot compete with.

The Green Party. – Led by Natalie Bennett. – Colors & Logo: Various Compostable Green Things.
Not the party of jealousy but the party of favorite eccentric aunts and the environment. Literally a grass roots movement that has lost political ground partly due to the lack of a good root network binding the soil and partly because they have failed to capture the “I’ll be dead by then” vote. Nevertheless, the Green Party deserves consideration because they are nice people with important things to say that we don’t want to hear about and are the party who are most likely to drop by at X-mas to gift you a novelty jumper that you will later find out is made from hemp.

The Scottish National Party: SNaP. – Lead by Nicola Sturgeon. – Colors & Logo: A Yellow Tear In A Black Trash Bag.
Narrowly missing out on winning independence from the UK in 2014 under Alex Salmon, SNP is now lead by yet another separatist fish. Although not being able to set their own fishing quotas this term, the SNP may hold sway in a hung parliament due to a mass change of allegiance by Labour Party MPs based in Scotland. Unfortunately, this won’t matter if no one can understand the accent. Should the SNP gain power, however, all pizzas would be reclassified as vegetables and all other vegetables would have their benefits cut. Haggis would be considered people too and would be able to hire or fire according to its religious beliefs.

United Kingdom Independence Party: UKIP. – Led by Nigel Farage. – Colors & Logo: A White…I mean, Purple Pound Sterling, Hoorah!
Living cartoon, Nigel Farage, formed UKIP in a pub after an argument with a Polish builder following 20 pints of lager. UKIP is largely comprised of everyone else in that pub … including the Polish builder when Nigel realized UKIP needed a token foreign chappie so as to seem not quite so racist. … which they aren’t, of course. Very reasonably Nigel and his jolly good chums simply don’t want Europe telling us what to do or touching our stuff. UKIP is not to be underestimated as Nigel is as charismatic as a tipsy Boris Johnson with hugely entertaining banter like how polar bears would be let into the country but pandas wouldn’t.
Campaign objectives include: Keeping everybody out. and Not being killed in a sword fight by Polish prince Yanek Zylmski.

The Liberal Democrats: Lib-Dems Boooo!. – Apologized for by Nick Clegg. – Colors & Logo: A Fleeing Yellow Bellied Dove.
Five years ago Nick Clegg was everyone’s darling, his party represented the middle ground and he had just become Deputy Prime Minister. His party could enact real change. … Unfortunately that change appeared to be with all the Lib-Dem campaign promises. Now the party is less trusted than a used snake oil salesman and less popular than Piers Morgan.
Campaign Objectives: Doesn’t matter, nobody trusts them. Getting the election deposit back.

The Conservative Party: The Tories. – Led by David Cameron. – Colors & Logo: Blue & Union Jack Tree ( not a real tree ).
Lead by Eton assembled Autobot, David Cameron, the Tortes have been making the tough decisions that have totally fixed Britain leaving it the world’s only superpower. But, despite being sent back from the distant future to terminate swans and ensure the dystopian Big Society we are all told we crave, Cameronbot has still received criticism. Nevertheless, the Tory party still strives to be the party of the ‘you people’ … as long as those people run banks.
Campaign Objectives: Approximate human emotions. Keep the Westminster Canteen well stocked with swans. Avoid explaining where the 8 billion pounds of funding for the National Health Service will come from at least 18 times in every interview. Be educated at Eton.

The Labour Party. – Led ? by Ed Miliband. – Colors & Logo: Embarrassed Red Rose.
Professional Beaker ( The Muppets ) Impersonator, Ed ( muppet ) has been trapped in the Labour Party’s headlights for so long now that he has taken to wearing a deer onesie. Traditionally, Labour is the party of the man in the street but now, like the Tories, everyone in the party has graduated from Eton and have to rely on their butlers to describe the man in the street as they never see such riff raff. This has left the party leadership out of touch and unable to grasp the concept of buying a ‘pig in a blanket’.
Ed’s Campaign Objectives: Master eating a bacon sandwich. Not lose political debates to former members of the Spice Girls. Win the title of Most Awkward Man In The World for a third year running. Roam the midnight streets vampirically sucking the charisma out of discarded wilting celery.

Two Marines And An Army Soldier Boarded The Same Flight…

What To Do When You Can’t Sleep