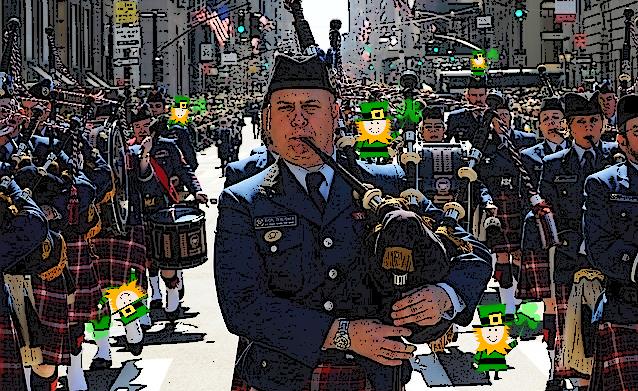 1. St. Patrick was British …
British, if that means being born to Roman parents in Wales.

2. What Are These Motherflipping Snakes Doing On These Plains.
Well … nothing. Snakes never made it to Ireland. It was too cold and seas too tumultuous it seems. Nevertheless, folklore has done its best to credit St. Patrick with vanquishing the wriggly critters from the land. Sadly the absence of snakes means that, to this day, Ireland is overrun by a plague of ladders.

3. Feeling Green.
Dressing up as Leprechauns, wearing shamrocks and the drinking of dyed beer are common sights on March 17 but none go green harder than the city Chicago which dyes its river green in a superbly dubious act of environmental irony.

4. The Little People.
Leprechauns are the magical lil guys who grant you one wish if you catch them and who stash their riches at the end of rainbows ( one of the better investment strategies since 2008 ). Warwick Davis played The Leprechaun in several comic horror films. Davis also played Wicket the Ewok in Return Of The Jedi in disturbing scenes where he chased Luke Skywalker around the forests of Endor, terrifying him with a flashlight and harrowing tales of his future acting career. They are not the same little people encountered by Gulliver on his travels although, if they had been, presumably Gulliver would have been tied up with rainbows in a much more fabulous affair. Leprechauns are not short because bits keep falling off them.

5. More Short Stuff.
The shortest St.Patrick’s Day Parade took place between two pubs in Dripsey, Ireland. It was 26 yards long. Currently, Hot Springs, Arkansas is the short parade title holder with a 98 foot march. What happen to unseat Dripsey, I don’t know. Possibly the parade was so drunk one year that it became disorientated between the two pubs and is still unaccounted for.

6. That’s Your Limit.
A staggering 13 million pints of Guinness may be quaffed this March 17

7. Blue Blow.
St.Patrick’s color is thought to have been light blue.

8. Cake At A Wake Mistake.
March 17th is the day St. Patrick passed on … It’s not his birthday. Cake is inappropriate.

9. St. Maewyn’s Day.
Legend suggests that St. Patrick was born Maewyn Succat, only being known as Patricius after becoming a priest. So, but for this change of name, we could very well be celebrating St. Maewyn’s Day each March 17th … or worse, Suc Cat Day.

10. Cats.
In a romantic gesture one St. Patrick’s Day, I climbed a tree intending to shower my friend with adorable red balloons before she return to Ireland never to be seen again. Once in position, however, my friend would not come near the tree being unconvinced that the sack I had hauled up the tree with me was not full of flea ridden feral cats. “Cats???” I said “Pffft! Cats are heavy.” All was not lost though, as I released the balloons anyway to the delight of several small children who chased them around the park on a windy day.

Thanks to mentalfloss.com, Google image search and fading memories of my glory days for inspiration.

My Humans! (Opening Scenes From A Work In Progress)

What Random Object Or Thing Would You Turn Into Metal?

What Are Some Stupid Things You Did As A Child?